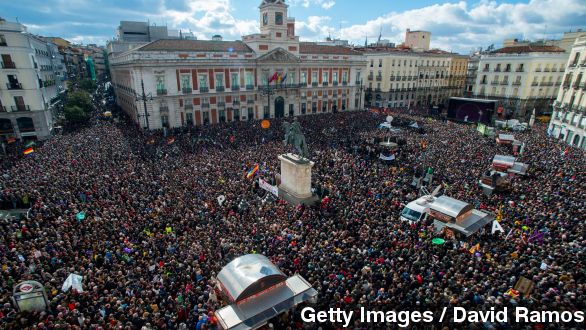 SMS
Spain's Anti-Austerity Podemos Party Hopes To Bring Change
By Jake Godin
By Jake Godin
January 31, 2015
Creating a platform of anti-austerity anti-corruption, Spain's Podemos party has risen in popularity since it was created in 2014, but can it succeed?
SHOW TRANSCRIPT

If that wasn’t already evident, a January 31 rally in Madrid made up of tens of thousands of Podemos supporters showed the extent of the party’s popularity.

With Spain’s general elections coming up this year, the question now is whether they can turn their quick popularity into a win.

If the recent election upset by Podemos’ Greek equivalent Syriza is any indicator, then some Podemos supporters say the answer may be yes.

But Spain’s December election is still a long ways off. If Syriza proves unsuccessful with its economic policies in Greece, it could hurt Podemos’s own popularity at home. (Video via Podemos)

Syriza has also been making some decisions that don’t sit well with Podemos. The party didn’t put any women in senior cabinet posts and also teamed up with a far-right Greek nationalist party.

One political analyst tells The Financial Times, both give Podemos reason to distance itself from Syriza. (Video via Left.gr)

Others suggest another reason Podemos may struggle in December’s election — Spain is not Greece. (Video via YouTube / Carlos Barbudo)

Unlike Greece, Spain’s economy is actually starting to improve. Bloomberg reported this quarter it showed the most growth the country has seen since 2007. The country’s debt-to-GDP ratio is also only 92 percent compared to Greece’s 175 percent. (Video via Ministerio de Industria, Energia y Turismo)

Spain’s general election is due to take place on or before December 20. Podemos will have until then to see how its popularity fares and to create a solid political strategy.