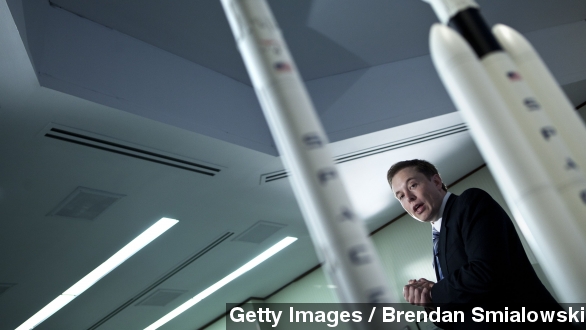 SMS
SpaceX Will Try Landing Rocket Booster On Ocean Platform
By Jasmine Bailey
By Jasmine Bailey
January 5, 2015
Tuesday SpaceX will send supplies to the ISS. And in the process, it will attempt to safely land the rocket launcher for reuse.
SHOW TRANSCRIPT

Tuesday morning, SpaceX plans to launch a cargo mission to the International Space Station for the fifth time. But this particular mission isn't just about what's going up, it's also about what will come down.

"Reusability — really, I think — is the critical breakthrough needed in rocketry to take things to the next level." said Elon Musk.

For nearly a decade, Musk has been talking about making spacecraft truly reusable — right down to the rocket boosters, and he hopes his company's Falcon 9 booster will be the first to live up to the challenge.

Vox explains why this is so unusual, saying rocket stages normally "break up into pieces as they plummet downward, eventually sinking in the ocean and becoming unusable. But on Tuesday, as the first stage falls back to earth, SpaceX will fire its engines in order to stabilize and guide it for a controlled landing."

Now, if this can be done, and Musk seems pretty confident it can, it could save countless resources.

In a statement on his company's website, he says, "If one can figure out how to effectively reuse rockets just like airplanes, the cost of access to space will be reduced by as much as a factor of a hundred."

Last year, SpaceX attempted two soft water landings, slowing the Falcon 9 to a stopping point just above the ocean's surface. Even though the landing shown here ended with the rocket falling over and exploding, both tests were considered a success.

This time around, the rocket is aiming for an unmanned floating platform, around 300 feet by 170 feet — pretty small when aiming from space.

Musk estimates there's only about a 50% chance it will work. But SpaceX is dedicated to trying again, and with about a dozen more launches planned this year, he says at least one landing is bound to be successful.

"Probably 80 percent, 90 percent likely that one of those flights will be able to land and refly. ... I think we're quite close."