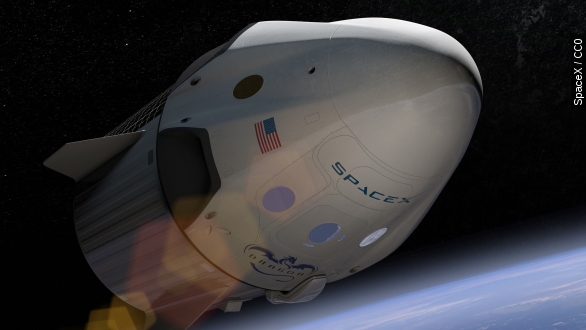 In this test, SpaceX Says “Our primary objective is to capture as much data as possible as the data captured here will be key in preparing Crew Dragon for its first human missions in 2017.”

The abort system uses eight SpaceX-designed Super Draco engines. Combined they can crank out 120,000 pounds of thrust in less than a second, to get astronauts as far as possible as fast as possible in the event of an emergency. (Video via SpaceX)

Launch escape systems are required for NASA to certify any crew program. NASA used similar rockets on its Apollo capsule, and will use a similar system for Orion when it starts manned launches in the early 2020s. (Video via NASA)

But where these systems use “puller” rockets to yank the crew capsule out of harm’s way, Crew Dragon’s rockets are built into the lower edges of the capsule in a “pusher” configuration.

Integrated rockets have two benefits: since they’re never ejected, Crew Dragon has abort capability at nearly any point during the launch sequence. And SpaceX hopes to use them for more than emergency escapes.

Just like its Falcon rocket recoveries, SpaceX plans to eventually return its Crew Dragon capsules to the ground under their own thruster power.

The next step is an in-flight abort test. SpaceX plans to test its escape system from aboard an ascending Falcon later this year. (Video via NASA)

This video includes images from SpaceX and NASA. Music by Esbe / CC BY NC ND 3.0.