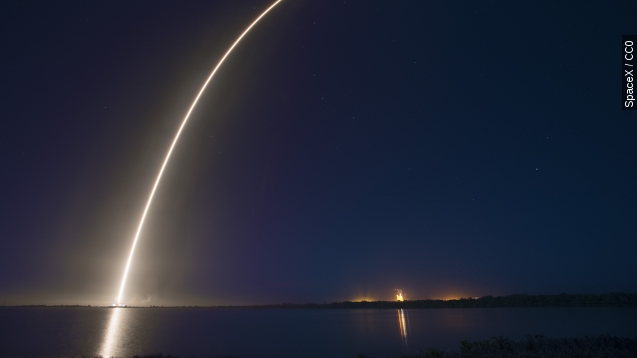 SMS
SpaceX Resupply Mission Breaks Up Minutes After Launch
By Evan Thomas
By Evan Thomas
June 28, 2015
This is the first loss of a contracted rocket in SpaceX's young history of launches and the first blemish on an otherwise almost perfect record.
SHOW TRANSCRIPT

SpaceX has lost its first contracted resupply rocket. It’s not yet clear what went wrong during its Sunday launch for the International Space Station.

"We stopped receiving data at about 2 minutes and 19 seconds from the vehicle. All of the video is being looked at, and the telemetry. At this point, it's not clear exactly what happened," said NASA's launch narrator following the incident. (Video via NASA)

NASA's launch live-blog reported confirmation of vehicle breakup, but until investigators have a chance to review data, that's as specific as the space agency will get.

NASA aircraft are now searching for debris from the rocket, which fell downrange into the Atlantic Ocean.

This is the first major blemish on what has been an otherwise stellar early career for SpaceX.

Of 18 launches to space, 18 have made it to space, and only one has encountered complications thanks to a faulty engine. (Video via SpaceX)

But a secondary payload from communications company Orbcomm fell out of orbit less than four days after it hitched a ride aboard the launch. (Video via SpaceX)

Note we're not counting SpaceX's experimenting with reusable launch vehicles in this tally. So far, its automatic landings haven't worked out, but each rocket has fulfilled its intended mission first. (Video via SpaceX)

Fifty-seven of its 59 resupply flights have been successful. The most recent — and likely most notable — exception is Progress 59, which lost control and eventually burned up before it could reach the ISS. (Video via NASA)

SpaceX is scheduled to start carrying human crews as early as 2017, at which point the stakes get higher. There haven't been crewed launches from the U.S. since the shuttle program ended. (Video via NASA)

In 135 shuttle flights since 1981, four were cut short due to equipment or weather complications. Two failed, resulting in the loss of shuttles and their crews: Challenger in 1986 and Columbia in 2003. (Video via NASA)

The Russian Federal Space Agency has made 58 manned Soyuz flights since 1992, with no fatalities. (Video via NASA)

With two years to go, SpaceX is already preparing its safety measures for manned flights. Last month it tested the abort rockets built into its crew capsule and anticipates in-flight abort tests later this year. (Video via SpaceX)

NASA is preparing for a press conference later this afternoon to discuss preliminary findings in its investigation of today’s failed launch.

On Twitter, SpaceX CEO Elon Musk said the company will issue more details when it has a chance to review the launch data. Stay with Newsy for more updates.

This video includes images from SpaceX / CC0 and NASA.

Correction: A previous version of this video misstated that this was SpaceX's first rocket loss. It was the company's first loss of a contracted resupply rocket. The video has been updated.