SpaceX Launch Successful, But No Rocket Landing This Time 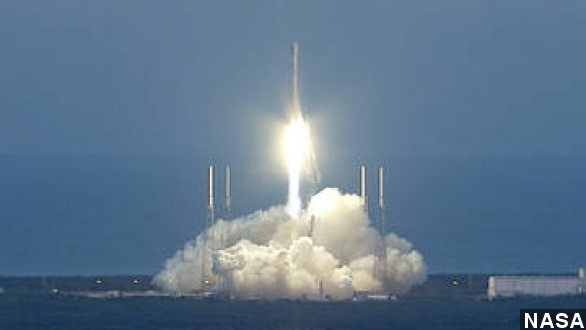 The satellite will track solar winds and storms, two potential threats to our satellites and electronics. But it was the rocket itself that was supposed to be the most exciting part of the mission.

After the Falcon 9 launched the satellite into space, it was supposed to land safely on an unmanned barge, allowing the company to reuse it. Rockets are usually one-time use, so being able to recover them intact has the potential to save a lot of money.

This would have been the second attempt to land a rocket that was used in a real mission, following a less-than-successful attempt in January that failed due to problems with the rocket's fins.

Unfortunately for SpaceX, extreme weather in the Atlantic Ocean meant the unmanned landing barge couldn't get into position safely, so there was almost no chance for the rocket to survive this time.

Instead, the rocket made a soft landing in the ocean. SpaceX founder Elon Musk tweeted it was "within 10m of target & nicely vertical! High probability of good droneship landing in non-stormy weather."

But practice makes perfect, and each launch is more practice for SpaceX. Musk has said the company will keep trying until it gets it right, and there are more than a dozen launches scheduled later this year.