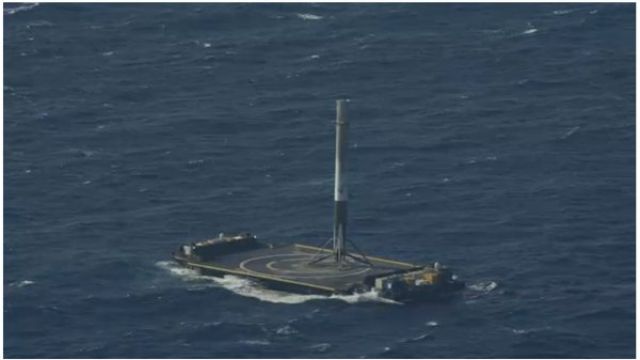 SMS
SpaceX Just Landed A Rocket On A Tiny Barge In The Middle Of The Ocean
By Matt Picht
By Matt Picht
April 8, 2016
This is the first time SpaceX has managed to safely land a rocket on a barge, and it's a big step forward for the company's reusable rocket plans.
SHOW TRANSCRIPT

SpaceX has gotten pretty good at launching its Falcon 9 rocket into space, but it's never quite managed to bring it back down for a safe landing on the water. Until now.

That cheering is the sound of progress. SpaceX has successfully landed a Falcon 9 on the ground before, but landing in the middle of the ocean on a tiny floating barge is a much trickier achievement.

If SpaceX can consistently replicate this success, it will be much easier to reuse a rocket for multiple missions. An ocean landing costs much less in terms of fuel and offers much more flexibility than guiding a rocket back to a specific landing site on the ground.

The water landing wasn't even SpaceX's main mission; the rocket's main goal was to launch the Dragon cargo vessel carrying supplies and experiments for the International Space Station into low-Earth orbit. That, too, went off without a hitch.

"In order for us to really open up access to space, we've got to achieve full and rapid reusability," SpaceX CEO Elon Musk said in a press conference.

SpaceX CEO Elon Musk has made reusable space rockets a major focus of the company. He told reporters the company plans to reuse this Falcon 9 rocket in another mission in a few months.