Spacesuit Water Leaks Not An Issue On Latest ISS Walk 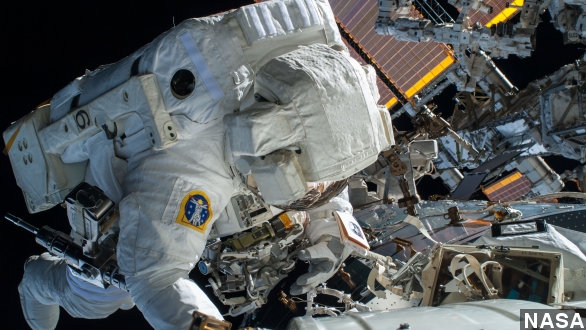 SMS
Spacesuit Water Leaks Not An Issue On Latest ISS Walk
By Evan Thomas
By Evan Thomas
March 1, 2015
Astronauts are ahead of schedule with hardware upgrades to the International Space Station, despite last week's spacesuit water leak scare.
SHOW TRANSCRIPT

Astronauts aboard the International Space Station are making good progress in the last of three spacewalks to prepare the facility for new hardware installations.

NASA's latest report put Terry Virts and Barry Wilmore an hour ahead of schedule, and Mission Control is surely happy to report their suits are working properly.

Terry Virts said a small amount of water leaked into his helmet at the end of the second spacewalk last week.

The spacesuit techs say the suit Virts was wearing has a history of water trouble. They call it "sublimator water carryover." In even more technical terms:

"A small amount of residual water in the sublimator cooling component that can condense once the environment around the suit is repressurized following its exposure to vacuum during a spacewalk, resulting in a tiny amount of water pushing into the helmet."

Water in spacesuits has been a recurring issue for the ISS crew, and in one instance, it was more than just a tiny problem. (Video via NBC)

"I feel a lot of water on my head, but I don’t think it's leaked from my back," ESA astronaut Luca Parmitano said on a spacewalk in 2013.

European Space Agency astronaut Luca Parmitano was mid-spacewalk when his helmet began to fill with water. He and his partner immediately canceled the job, but Parmitano lost vision and radio communications in the time it took him to get back inside.

NASA has since inspected and replaced the suits' cooling systems and installed low-tech backup safety measures: an absorbent pad to soak up wayward water and an emergency "snorkel" the astronauts MacGyvered together from plastic tubing and Velcro.

Luckily, none of this has been necessary on Sunday's spacewalk. By the time they're done, Virts and Wilmore will have spent more than six hours extravehicular, running the last 400 feet of cable needed to connect new docking collars to the station and installing two new communications masts.

Those antennas will help direct spacecraft around the ISS. Traffic to and from the station is expected to pick up in 2017 when the Commercial Crew Program gets underway.