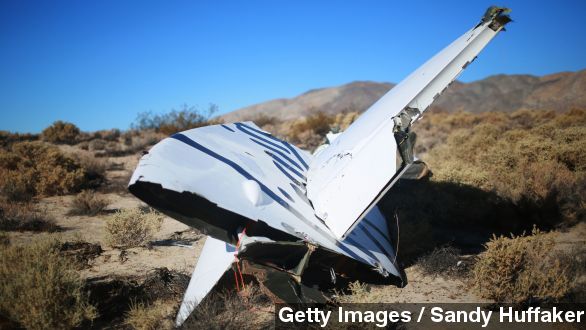 By Jay Strubberg
November 4, 2014
Investigators confirmed Monday the copilot who died in the Virgin Galactic spaceship crash was the person who unlocked the brake system too early.
SHOW TRANSCRIPT

Federal investigators confirmed Monday night the copilot who died in the Virgin Galactic spaceship crash was the person who unlocked the brake system too early, a move that happened just before the fatal accident.

Hart is also quoted in BBC saying, "There are several links in the chain to find out what the total cause of this accident is. We have a lot we don't know."

While Hart did not place blame, he did lay out a timeline of events. The NTSB chair said within seconds after Alsbury triggered the mechanism the plane lost video feed and broke apart in the air.

In addition to the video footage, the NTSB say they've located debris from the experimental spacecraft 35 miles from the main crash site. ABC says those are smaller pieces from the plane caught up in wind currents.

Even as an experimental flight, the crash of Virgin Galactic's spaceship along with the explosion of Orbital Science's Antares rocket over the past week have many questioning what this will mean for space tourism.

ABC: "Virgin Galactic is being criticized by some observers who suggest there was pressure to pick up the pace of the program. Seven hundred people have signed up, including some of Hollywood's elite."

Still, a writer for Mashable argues people who are signing up for these trips are aware of the inherent dangers that come along with it.

"Everyone who boards a Virgin Galactic flight, whenever such a thing happens, will be a space pioneer — and they'll assume all the risks that all pioneers in previous centuries did. ... This is exploration, not a safari."

Federal investigators soon plan to question the wounded pilot who survived Friday's crash, to find out more details about the fatal accident. Officials say the final analysis could take more than a year to complete. (Video via NTSB)