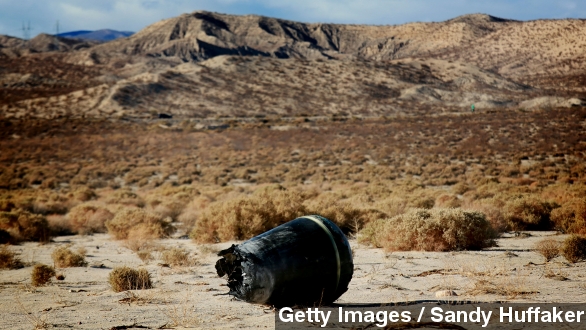 SMS
SpaceShipTwo Crash Investigation Is New Territory For NTSB
By Evan Thomas
By Evan Thomas
November 2, 2014
The National Transportation Safety Board expects its work to take about a year, during which Virgin Galactic will be able to continue test flights.
SHOW TRANSCRIPT

The National Transportation Safety Board has begun an investigation into Friday's crash of Virgin Galactic’s SpaceShipTwo.

NTSB acting chairman Christopher Hart said the board will spend four to seven days on the scene of the crash, and more time off-scene, gathering factual data. Phase two will be internal analysis of its findings.

CHRISTOPHER HART VIA BBC: “Time elapsed in the process will be probably about 12 months total.”

It’s somewhat new territory for the NTSB. Hart says while the board assisted in the investigation of the Columbia and Challenger space shuttle incidents, it’s never before taken the lead in an investigation of a manned space launch. (Video via National Transportation Safety Board)

SpaceShipTwo broke up at 45,000 feet on Friday, October 31, killing one pilot, injuring another and scattering debris over a five-mile stretch of the Mojave desert. (Video via KABC)

The Guardian reports SpaceShipTwo was making the first flight test of a new fuel compound, in the first flight in nine months of downtime. But there’s otherwise little in the way of concrete detail this early in the investigation.

VIRGIN FOUNDER SIR RICHARD BRANSON VIA THE TELEGRAPH: "We're going to learn from what went wrong, discover how we can improve safety and performance ... We are determined to honor the memory of the pilots and the teams here by learning from this tragedy."

Branson’s company is known for its enthusiastic momentum — a characteristic which, given the exacting requirements of spaceflight, has its share of critics.

The Daily Beast writes: “From the beginning in 2004 there has always been a credibility gap between the fairground hyperbole of Branson’s formidable publicity machine and the scientific reality of the enterprise. This time it’s different. A National Transportation Safety Board investigation will deliver a forensic rigor that has been so far lacking.”

Virgin will be able to continue test flights while the investigation is ongoing. The NTSB says it will announce any findings that warrant early disclosure before the conclusion of its investigation.