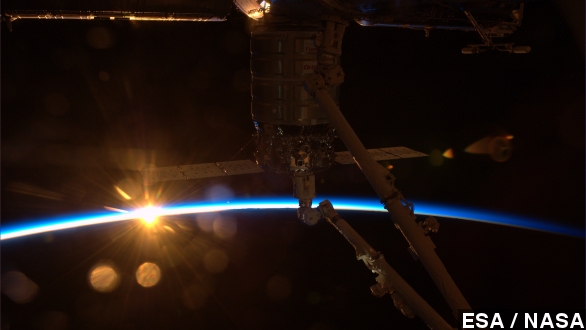 For the larger international space agencies, like NASA and the Russian Federal Space Agency, manned spaceflights have been the pinnacle of achievement. (Video via NASA)

"There are fields where we are certainly the leaders and this is particularly true for Earth observation."

And recently returned ESA astronaut Alexander Gerst shared his own Earth observation with the world in a six-minute time-lapse video of Earth captured during his time on the International Space Station. (Video via European Space Agency)

Gerst was a geophysicist and volcanologist before being selected as an astronaut in 2009. In May he became only the third German to visit the ISS.

His mission to the station was called the Blue Dot Mission, named after astronomer Carl Sagan's description of Earth. Gerst conducted more than 100 hours of scientific experiments across several fields including materials science, the space environment and biology.

Gerst's research in medicine included this Skin-B experiment where he collected data from his skin to help develop a model of how skin ages. (Video via European Space Agency)

And while conducting his experiments, Gerst would often set cameras to take pictures of the planet at regular intervals, creating time-lapses of terrestrial phenomena like storm systems and auroras.

Gerst, who also blogged and tweeted throughout his time on the station, returned to Earth in November.

This video contains music from Broke for Free CC BY NC 3.0.