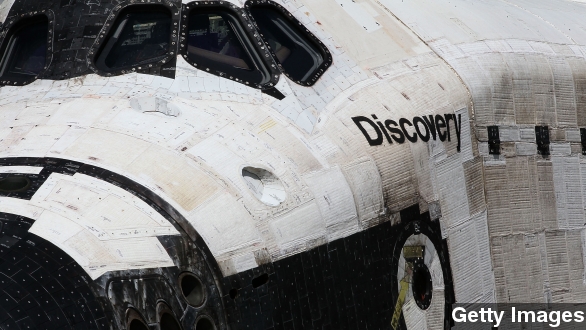 The space shuttle Discovery is one of NASA's most seasoned shuttles. It's flown to space more than any other orbiter. It was the first to retrieve a satellite and bring it back to Earth. And it helped launch a telescope that's seen deeper into space than ever before.

ABC: "We have SRB ignition, and we have liftoff. Liftoff of mission 41-D, the first flight of the Orbiter Discovery, and the shuttle has cleared the tower."

But its first voyage didn't come without a few speed bumps along the way. Three previous launch attempts had been canceled just before liftoff due to last-minute problems. (Video via CBS)

Despite those setbacks, Discovery soon became the new hero of the space shuttle program.

The shuttle went on to complete 39 missions between 1984 and 2011 — more than any of NASA's other four shuttles.

It launched the Hubble Space Telescope into obit in 1990 and took a trip to the International Space Station in 2005.

And it boasted some pretty impressive passengers over the years too. Discovery carried the first senator, Utah's Jake Garn; the first Latina, Dr. Ellen Ochoa; and the oldest astronaut, John Glenn.

But arguably the most important thing Discovery did during its lifetime was act as what Gizmodo calls the "comeback champion for NASA."

The Challenger disaster in 1986 and the Columbia disaster in 2003 shocked the world and put a temporary halt to space missions. (Video via BBC)

Discovery was the shuttle that got NASA back into space after both of those tragedies.

In 1988, two years after the Challenger disaster, Discovery made its way into space as the nation's first "Return to Flight" mission since the tragedy.

And its STS-114 mission in 2005 was the first space shuttle mission following the Columbia disaster. (Video via CNN)

Discovery's very last flight was a little less challenging than its previous missions. But it was still pretty notable.

In August 2012, the shuttle flew a victory lap of sorts around Washington, D.C., on top of a Boeing 747 on its way to the Smithsonian National Air and Space Museum Annex. (Video via NASA)

And now, after an impressive 27-year career, Discovery resides in the Smithsonian's hanger in Chantilly, Virginia.

And if you ever feel like checking up on the old shuttle, you can take a peek into the space hanger's live webcam 24 hours a day, seven days a week.