Space Freighter Could Be A Rare Loss, But Not A Critical One 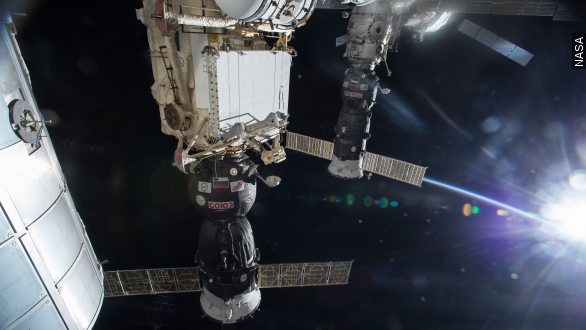 SMS
Space Freighter Could Be A Rare Loss, But Not A Critical One

By Evan Thomas
April 29, 2015
If a nonresponsive Progress 59 falls out of orbit, it would be only the second failed mission in the unmanned resupply vehicle's 15-year history.
SHOW TRANSCRIPT

A resupply freighter bound for the International Space Station is unresponsive in orbit, and it might not stay there for long. (Video via NASA)

Progress 59 is an uncrewed resupply vehicle carrying more than 3 tons of food, supplies and fuel for crew aboard the International Space Station. It launched from Russia's Baikonur Cosmodrome on Tuesday, then stopped responding to commands. (Video via NASA)

"Due to sporadic telemetry from Progress 59, inconclusive data, and trouble uplinking commands to the spacecraft, controllers were unable to confirm the status of the systems."

The original mission called for a space station rendezvous within six hours of launch. Flight controllers bumped it out to two days and then put it on indefinite pause while they try to sort out the trouble.

At time of writing, the spacecraft is in a slow spin and still unresponsive. If flight engineers can't get it to follow commands, it's expected to make an uncontrolled re-entry and burn up in the atmosphere. (Video via NASA)

This is big news and not just because there's a spaceship spinning out of control: In the 15 years Progress spacecraft have been supplying the ISS, this is only the second mishap.

To date, there have been 58 Progress flights to the International Space Station and 57 successful dockings.

In 2011, Progress 44 suffered a third-stage shutdown failure — just minutes before achieving orbit — and crashed in Russia. (Video via NASA)

Losing Progress 59 would be a setback but not a critical one. NASA notes there's nothing irreplaceable aboard the freighter and told Space.com the ISS crew is "adequately supplied for well beyond even the next planned cargo flight."

According to CBS, the ISS is still stocked for four months of normal operations.

The next supply launch is slated for June, contracted to SpaceX. The company is 6-for-6 on resupply runs to the ISS.