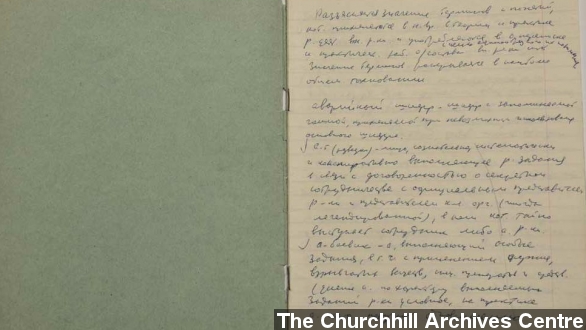 By Elizabeth Hagedorn
July 7, 2014
More than 20 years later, Cambridge University has released a trove of KGB documented handed over by a Soviet defector.
SHOW TRANSCRIPT

​In what’s being described as one of the biggest intelligence leaks in history, a trove of KGB documents are now public — detailing a network of Soviet spies leading double lives in the U.S. and Britain.

That may sound familiar to fans of FX’s series “The Americans” — a show about undercover agents living in the suburbs. (Via FX / "The Americans)

The show’s creators say they drew inspiration from the work of disillusioned KGB officer Vasili Mitrokhin who smuggled his handwritten notes out of Russia in 1992 before turning them over to Britain. (Via CBS)

While the official historian for the UK's intelligence agency has written at length about Mitrokhin, this is the first time the public is getting access to the files. (Via Amazon)

They describe booby traps, weapons caches and communications hidden around NATO countries. And we also have a list of 1,000  KGB agents had operated in U.S. (Via History Channel)

To be fair, despite all the attention surrounding the document’s release, a lot of the big names in that list belong to Westerners already exposed as having ties to the KGB.

Among them, Robert Lipka — an NSA employee paid $27,000 for supplying information to the Soviets in the 1960s. (Via FBI)

​Then, there’s Philip Agee — he’s the ex-CIA officer who turned against the agency and published a long list of American spies. According to the new documents, he used material given to him by the KGB. (Via Bert Verhoeff / Anefo / CC BY-SA 3.0)

We do have new details on Melita Norwood — the so-called “Grandmother spy” — who was the KGB’s longest-serving British agent. According to The Guardian, the documents reveal she "passed on a lot of valuable materials for nuclear energy which she accessed by removing them from her boss's safe, photographing them and then placing them back.”

Other deep cover spies were less reliable. The notorious Cambridge Five were British spies recruited while studying at Cambridge University. The KGB worried they were constantly drunk and at risk of blowing their cover. (Via The Telegraph)

Then again, what's a spy without a martini in hand? (Via Metro-Goldwyn-Mayer / Casino Royale)

“They come and recruit our best minds as spies and throw it back in our face saying they are drunk. James Bond — massive alcohol dependency — but that didn’t stop him in his job.” (Via Sky News)

Before he died in 2004, Mitrokhin had asked for his files to be made public. After a vetting process, thousands were translated and released to researchers by the Churchill Archives at Cambridge University.