Southwest Cleared To Use Planes Overdue For Inspections 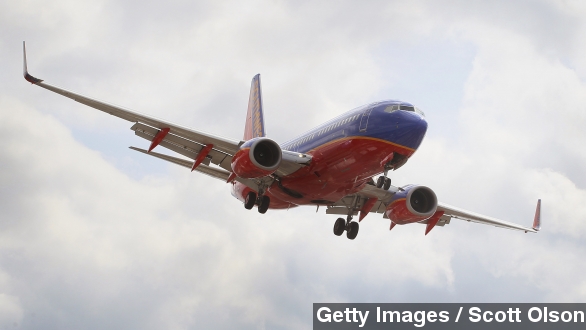 This is one of those stories that probably — hopefully? — sounds more terrifying than it really is.

Early Wednesday, the feds gave Southwest Airlines the green light to use planes that missed an inspection. Scary, right? Well, the missed inspection was for the planes' backup hydraulic system. (Video via KWYB)

But don't panic and swear to never fly with the airline again quite yet — Southwest agreed to have the planes checked within the next five days, and the missed inspections, again, were for a backup system.

When Southwest realized it had missed inspections, it voluntarily grounded 128 of its Boeing jets — a big blow considering the Journal says that's a fifth of the company's fleet. This caused about 80 flights to be canceled Tuesday. (Video via KDFW)

People responded to the company's Twitter message about removing some of its jets. Some were thankful of the voluntary grounding, some were sarcastic and one person even called it a "greater betrayal of trust." Talk about melodramatic.

Fewer flights were expected to be canceled Wednesday as a result of officials giving Southwest the OK to use the planes. (Video via ABC)

The plane's hydraulic system is one of the more important ones. And just because it was the the backup hydraulics that needed the inspections doesn't diminish their importance.

Hydraulic systems power a number of plane functions, from raising and lowering landing gear to auto-pilot to steering on the runway. (Video via Southwest Airlines)

Important things. Like, for example, in 2011 when LOT Polish Airlines Flight 16 was forced to land with no landing gear when its hydraulics malfunctioned.

While no one was seriously hurt in that instance, it's not exactly the safest way to land a plane.