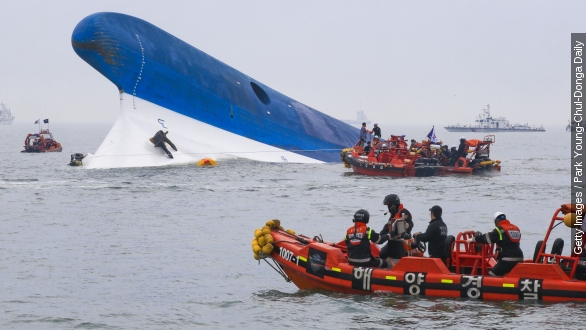 The captain of the ferry that sank off the coast of South Korea just over a year ago has been sentenced to life in prison.

More than 300 people were killed when the ferry capsized on April 16, 2014, the majority of whom were high school students who were onboard for a field trip. (Video via BBC)

This verdict comes after a court initially found Lee Joon-Seok guilty of willful negligence and abandonment of his passengers back in November. He was originally sentenced to 36 years in prison.

But the prosecution had pursued a death sentence for the captain and his fellow shipmates, saying the crew didn't provide the equipment needed for passengers to escape safely from the large vessel. (Video via Yonhap News Agency)

The prosecution appealed the court's decision and Lee was sentenced to life in prison after the appellate court found him guilty of homicide.

The New York Times reports, "Historically, murder through willful negligence has been a difficult charge to prove in South Korea," but prosecutors were successful in this case because they were able to prove Lee and the crew didn't take any steps to save the passengers, like sounding an evacuation alarm.

Family members of some of the victims have criticized the government for not doing enough in its investigation, and for using the captain as a scapegoat. (Video via Channel NewsAsia)

Earlier this month, South Korea's president announced an operation will begin later this year to salvage the sunken ferry.

The country's Public Safety Minister said it's believed the bodies of the nine people still missing are inside the vessel. The government expects it'll take up to a year and a half and cost around $139 million to completely salvage it.