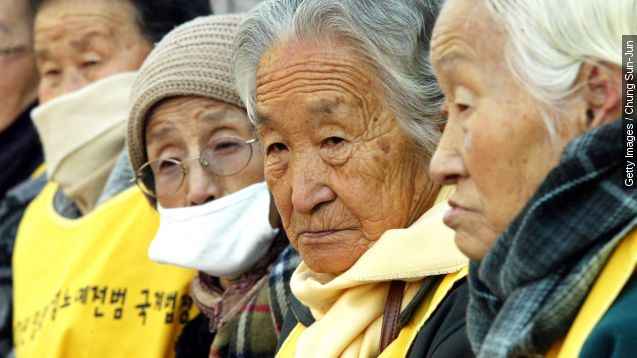 SMS
South Korean Comfort Women Threaten To Sue Japan
By Jake Godin
By Jake Godin
June 23, 2015
A dozen comfort women from South Korea say they will bring Japan to court if the nation doesn't offer an apology over its wartime past by July 1.
SHOW TRANSCRIPT

A dozen South Korean so-called “comfort women” are planning to sue Japan if the nation doesn’t issue an apology by the end of June. (Video via KBS)

According to Yonhap, a South Korean government news service, the suit would seek $2 million for each woman as reparation for what they say are wartime atrocities committed by Japan during World War II. (Video via Yonhap News TV)

The women, however, say it’s not about the money. Their attorney told Yonhap the point is to get Japan to make a sincere apology. (Video via YTN)

It is widely believed an estimated 200,000 women and girls were forced into sexual slavery for Imperial Japan’s soldiers during WWII. But some Japanese claim the women willfully prostituted themselves. (Video via Arirang)

Because of the split, and the current government’s unwillingness to directly apologize for its wartime past, comfort women have become a divisive issue between Japan and Korea.

When Japanese Prime Minister Shinzo Abe visited the U.S. in April, many Koreans were hoping he’d take the opportunity to commit to a more direct apology over the issue. Instead, he sidestepped the question when it was brought up.

“I am deeply pained to think about the comfort women who experienced immeasurable pain and suffering as a result of victimization due to human trafficking. This is a feeling that I share equally with my predecessors,” Prime Minister Shinzo Abe said during a White House press conference.

Compare that with Japan’s 1995 prime minister, Tomiichi Murayama, who issued a pretty direct apology to the remaining comfort women and admitted the involvement of Japan’s military. (Video via CCTV)

While some comfort women accepted the apology and compensation at the time, others didn’t on the grounds Japan wasn’t admitting any legal responsibility for the compensation.

Japan and Korea have started to gradually improve ties. To commemorate the 50th anniversary of their diplomatic relations, both countries hosted embassy events in their capitals.

But time may be running out for the comfort women demanding an apology from Japan.

Already two have passed away and are now being represented by their sons. The rest are older than 80.

This video includes images from Getty Images and joonyoung kim / CC BY NC SA 2.0, and music from Chris Zabriskie / CC BY 3.0.