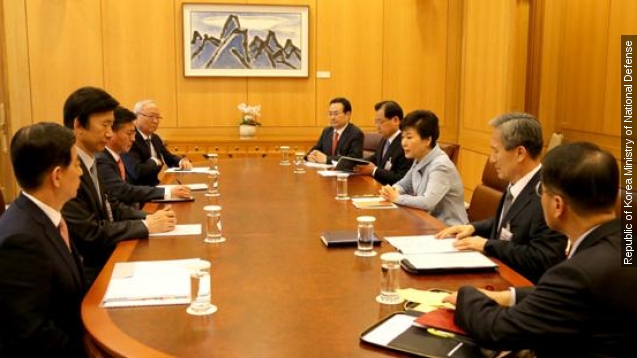 South Korea flexed its military muscles Wednesday in a move with much further reach than any ground force could achieve.

The country's Defense Ministry announced this launch was a successful test of a ballistic missile capable of reaching 500 kilometers — or nearly every part of North Korea. South Korean President Park Geun-hye was on hand for the test. (Video via YTN)

Up until 2012, South Korea had only been allowed to develop ballistic missiles that could travel a max of 300 kilometers. That's when the U.S. agreed to let South Korea extend the range of its missiles as long as they couldn't threaten China or Japan. (Video via KBS)

Along with the new missile, Yonhap reports South Korea also plans to build a missile defense system to protect it from possible Northern aggression.

This, of course, comes just a month after North Korea announced it had successfully tested a submarine-based ballistic missile — something U.S. military officials quickly denounced as rhetoric, saying the sub images were altered.

"One of the things the North Koreans do is they don't test their missiles, so they can't have very great confidence in something like this," said Vice Chair of the Joint Chiefs of Staff Adm. James Winnefeld Jr. on Tuesday. "Again, if it launches and it doesn't work, boy, they're in such trouble because we will have seen their intent." (Video via Center for Strategic & International Studies)

There has been concern the easing of missile restrictions on South Korea could create an arms race in the tense region, but the North already has ballistic missiles with the ability to strike the South. And the commander of U.S. forces in Korea said in October he believed North Korea's claim that it was capable of producing a miniaturized nuclear device — a key step in building a nuclear intercontinental ballistic missile. (Video via CCTV and The Pentagon Channel)

Another development noted by media outlets: South Korea's new missile appeared to be launched from a vehicle, suggesting the missile system is mobile. Yonhap reports South Korea plans to deploy its new missile by the end of the year. (Video via Arirang)

The outlet quoted Park as saying, "North Korea will have no choice but to come forward for dialogue rather than provocation."