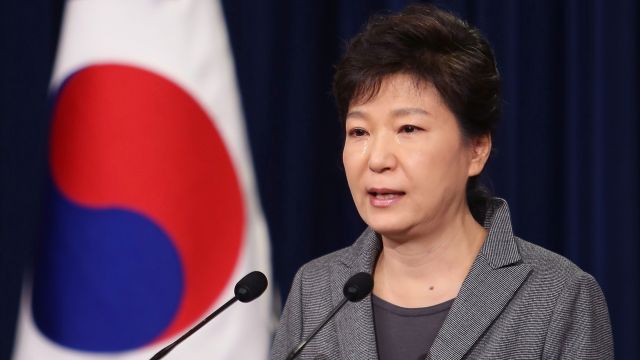 In the spirit of 2016 and all its political drama, South Korea is in the midst of a presidential corruption scandal that could end in resignation or impeachment.

President Park Geun-hye now says she will step down if her country's legislature demands it.

Park got caught up in the investigation of Choi Soon-sil, her friend of 40 years, who has been indicted on charges of coercion, fraud and abuse of power.

SEE MORE: A Really Weird Scandal Is Going On In The South Korean Presidency

Choi has never held political office and has no security clearance, so how did she have so much influence? Turns out, she and the president go way back.

Park's father was an army general who led a military coup in 1961 to take power. Her mother was killed during a botched attempt on her father's life.

Not long after, Park received a letter from Choi's father, Choi Tae-min, a cult leader who claimed he could contact Park's deceased mother. That spiritual connection now supposedly rests with Choi Soon-sil.

After Park became South Korea's first woman president, it emerged that Choi had been acting as a sort of "shadow president," giving Park advice on everything from budget cuts to her personal wardrobe.

Choi's accused of using her connection to the president to, among other things, coerce around $70 million from the country's major lobbying firms and send her failing daughter to one of the country's most prestigious schools.

That second revelation hit particularly hard in a country that puts a great deal of value on educational prestige as a road to a high-paying job.

Investigators say Park was complicit in these crimes. Prosecutors indicted two former presidential secretaries in connection with Choi and the scandal.

Park had been resilient, defying calls to step down. Her lawyer claimed she was too busy to cooperate with prosecutors and submit to questioning.

South Korean law doesn't allow for a sitting president to be prosecuted while in office, but investigators are able to gather evidence and have a case ready when Park leaves office in December of 2017.

But after multiple weekends of protests and two public apologies, Park seems to have changed her tone. She made a third public apology, this time saying she would step down if members of the legislature called for it.

This, critics say, would be a way for Park to avoid the personal embarrassment of the impeachment process, which could go on even after her term ends.