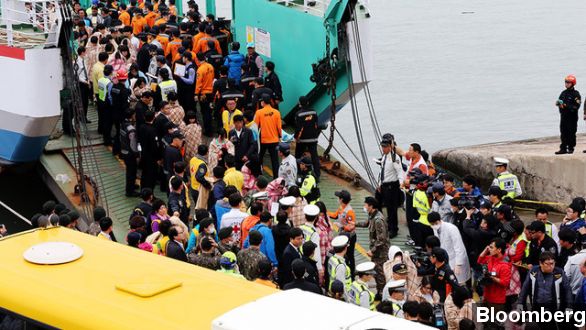 SMS
South Korea Ferry: 3 People Accused Of Destroying Evidence
By John O'Connor
By John O'Connor
April 28, 2014
As the investigation into the disastrous sinking of the South Korean ferry broadens, so does the range of potential wrongdoing.
SHOW TRANSCRIPT

As the investigation into the disastrous sinking of the South Korean ferry broadens, so does the range of potential wrongdoing.

The Korea Shipping Association is a trade group promoting the interests of the country's shipping industry.

Names of those arrested haven't been released, but the office's director was among the three taken into custody.

Meanwhile, another prosecutor issued search warrants for an emergency service operations center and the Coast Guard for alleged dereliction of duty. (Via ITV)

The rapidly expanding probe, and subsequent arrests, follow the tragic April 16 capsizing of a South Korean ferry in which 189 people have been confirmed dead. Another 113 people still have not been found.

The ferry's captain and entire crew have also been arrested. This newly surfaced video shows the captain was one of the first people to get off the ship. He and the crew face charges stemming from causing death by abandoning ship and violating the country's maritime law. (Via Fox News)

And after harsh criticism for the government's slow response to the disaster, South Korea's prime minister has announced his resignation. During that announcement, he cited deep-rooted evils in society as contributing to the catastrophe. (Via BBC)

Investigators are still unsure of what caused the ferry to sink, but their current theories include over-capacity and shifting cargo.