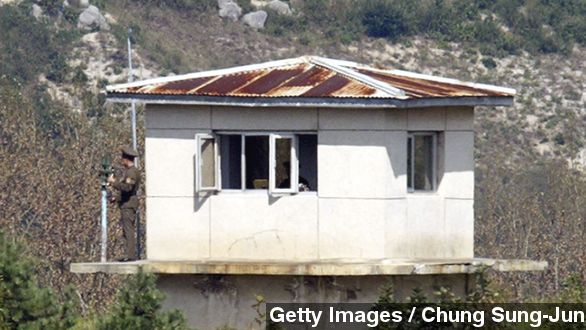 South Korean authorities say they arrested a U.S. citizen Tuesday night who they say was trying to swim to North Korea to meet the country's leader.

According to Yonhap News Agency, the man who's believed to be in his late 20s or early 30s was swimming in the Han river, which flows toward North Korea.

And before he was taken into custody, the man reportedly told investigators he was attempting to meet with North Korean leader Kim Jong-un. Why is still unclear. (Video via Euronews)

But trying to swim across the Han could cost someone his or her life. The North and South are technically still at war after the 1950-1953 conflict between them ended in a truce instead of a peace treaty.

And because of that, the border between the two countries is one of the most heavily guarded in the world. Unauthorized attempts to cross it in broad daylight are rare and extremely dangerous.

But that hasn't stopped some from trying. Back in 2013, one South Korean man who tried to swim to the North across the Imjin River section of the border was shot dead by South Korean troops who were manning a post nearby.

The U.S. embassy in Seoul says it has been in contact with South Korean authorities about the reports, but any further details have yet to be released.