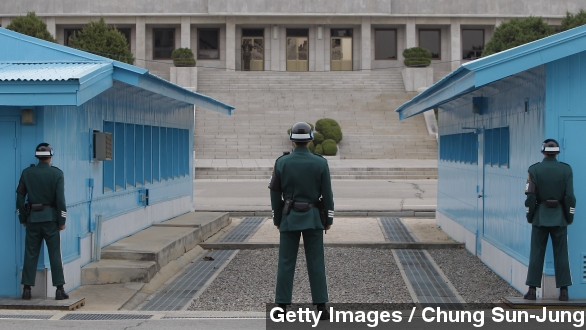 This time of year carries with it countless traditions — building snowmen, hanging up the mistletoe, erecting a 30-foot-tall Christmas tree in a geopolitical hotspot to piss off your totalitarian neighbors to the North.

That last one is going down in South Korea, where a Christian group plans to put up a tower covered in Christmas lights, calling it a symbol of peace. (Video via Arirang)

But the North has seen it as anything but peaceful, calling it the latest act of provocation and propaganda by the South and reportedly threatening to shell it. (Video via RT)

Well, that last part's a little hard to corroborate, but in any case, it's not really bringing any peace to the area, nor has it been — the "tree" has a bit of a history.

South Korean state news agency Yonhap reports "the Tower had been lit annually during the Christmas season until the two Koreas agreed to halt propaganda activities in 2004."

That is until 2010, when a South Korean warship sank, and South Korea, along with the U.S. and other allies, all accused the North of torpedoing it. (Video via BBC)

That year, the "tree" was lit up again, and that tradition continued until the tower was torn down for safety reasons, although the military made clear it wasn't to improve relations with the North. (Video via NTDTV)

Those relations haven't improved, despite North Korea's charm offensive it initiated after the United Nations released a report detailing the country's crimes against humanity and voted to refer Kim Jong-un to the International Criminal Court.

The group that proposed the tree's construction plans to light it up for two weeks starting Dec. 23.

No word yet on exactly how the North plans to respond, but we wouldn't be surprised if it involved a makeshift Santa Claus outfit and a dog with an antler ... (Video via Warner Home Video / "How the Grinch Stole Christmas")