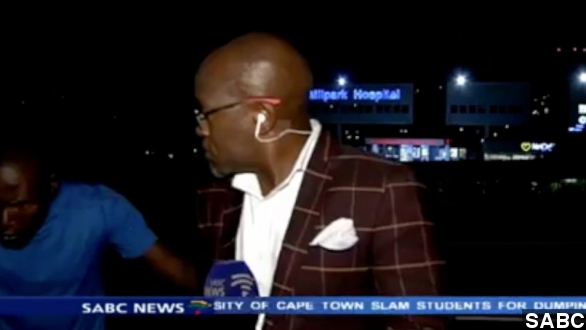 SMS
South African Reporter Robbed On Camera
By Matt Moreno
By Matt Moreno
March 11, 2015
SABC contributing editor Vuyo Mvoko was preparing for a 7 p.m. live shot when he and his crew were mugged.
SHOW TRANSCRIPT

If you're a live TV reporter, it's always good to expect the unexpected.

But this is something South Africa contributing editor Vuyo Mvoko never could have seen coming. While the SABC reporter was preparing for a report on Zambia's president, Mvoko and his crew were mugged.

You can see Mvoko briefly struggling with the men as a crew person says, "We're being mugged," right before the feed cuts to the news studio.

The attack happened outside of Johannesburg's Milpark Hospital before Mvoko was supposed to go on air for the 7 o'clock newscast.

The men reportedly stole two cellphones and a laptop.

"I had my phone in my hand because I had just spoken to the executive producer. ... I wasn't giving him the phone. Then he calls the other one who has a gun," Mvoko said afterward on SABC.

Mvoko says he and his crew later flagged down a passing police car. That officer stopped and tried to find the suspects but couldn't locate them.

Local police issued a statement saying, "We are shocked at the brazen nature of this crime," and vowed to find the men responsible.

Back in 2013, a similar story happened when a reporter for KINC in Las Vegas was mugged by a man trying to steal his necklace.

And in 2014, this KTVU reporter was robbed while reporting on a robbery in Oakland.

SABC is urging anyone with information about the robbers to call local police. No injuries were reported.