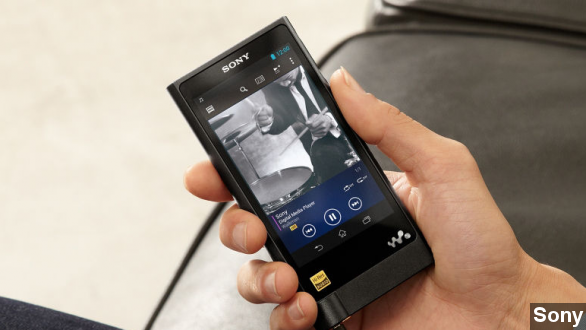 SMS
Sony Targets High-End Audiophiles With $1,100 Walkman
By Danny Matteson
By Danny Matteson
January 6, 2015
At the Consumer Electronics Show in Las Vegas this week, Sony rolled out the Walkman NW-ZX2, a new version of the classic music player.
SHOW TRANSCRIPT

If you're a child of the '80s or '90s, we're guessing one of these stylishly adorned your hip at one time or another.

"Sony introduces the only cassette player as small as a cassette case," a commercial from the company says.

Now Sony is launching a new Walkman — a more high-end audiophile version with a little bit of nostalgia built in.

Dubbed the Walkman NW-ZX2, it rolled out at the Consumer Electronics Show in Las Vegas this week. (Video via Phandroid)

"This is not a multipurpose device. This is very much, decidedly so, an audio first — arguably an audio-only device," a reporter for The Verge says.

Like its predecessors, the resurrected portable player delivers all your favorite tunes — and that's about where the similarities end.

The new version is designed to play high-resolution audio — no tape hiss and skips here. According to a statement from Sony, it can "reproduce master quality recordings just as the artists originally intended."

Also unlike its ancestors is the price tag, coming in at a little more than $1,100. (Video via SGNL)

For that hefty sum, though, you'll also get 128GB of built-in storage — enough to hold about 2,000 high-quality songs — a microSD slot for added storage, Wi-Fi capability and 60 hours of battery life.

Strangely, you'll also get a slightly outdated operating system, as according to USA Today, the Walkman is currently running Android 4.2 — which launched in 2012.

Sony has made attempts to relaunch the Walkman name in the past. As CNN notes: "Rebranding the Walkman as a high-resolution media player is Sony's umpteenth attempt to resuscitate the iconic brand. … Over the past decade, Sony has released Walkman-branded headphones, MP3 players and phones."

The newest incarnation also won't be without competition. Music legend Neil Young's high-definition Pono player is set to ship in February after raising more than $6 million on Kickstarter.

According to Sony, the newest Walkman is set to hit stores this spring.

This video includes images from Ted Court / CC BY NC SA 2.0 and Sony and music from Broke For Free / CC BY 3.0.