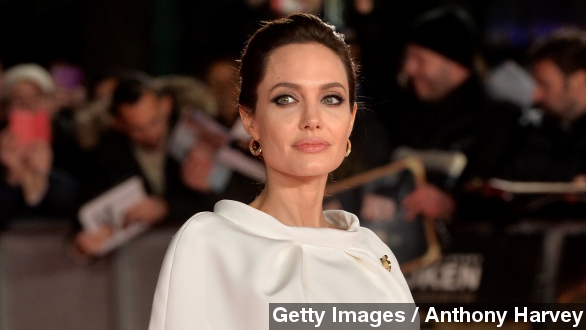 The latest in the Sony hack is an early Christmas present for gossips.

It's all over that Steve Jobs movie that notoriously couldn't get off the ground at Sony.

According to these, Jolie was upset that director David Fincher was scheduled to do the movie instead of her revival of the Cleopatra story. But Rudin writes:

"I'm not destroying my career over a minimally talented spoiled brat. ... She's a camp event and a celebrity and that's all and the last thing anybody needs is to make a giant bomb with her that any fool could see coming."

Oh, wow. This is serious stuff. Seriously awkward for Hollywood.

He also calls Jolie insane, says she's got a "rampaging, spoiled ego" and tells Pascal to "shut Angie down." An ironic coincidence: Not long after the emails leaked, People magazine released its latest cover:

Angelina Jolie discussing the "beautiful year" she's had in 2014 and her "biggest moments" in it. This leak could certainly be added to the list.

The insider insight is quite the contradiction to the carefully crafted image you see on magazine covers, and right now Jolie is on a big press push for her Christmas release, "Unbroken."

Now, we'll note that in later emails, Rudin says he respects Pascal, and also that he's willing to talk to Jolie about his issues ... but then again things go sour between the two.

It's quite the insider insight into why the Jobs movie didn't happen at Sony and also into how Hollywood's higher-ups work in their relationships. At least some of them are seemingly just as dramatic as we think actors are.

But Deadline points out this isn't as much of a surprise to the industry: "Is there anyone in the movie business who hasn't been on the blistering end of an email rant one day and a wet kiss the next? Where's the news?"

Sure, but to the public, these emails look petty and unprofessional. We're guessing a few awkward phone calls are being made today.

Sony's been the target of a hack since late November by a group calling itself the Guardians of Peace — a group that's demanding Sony cancel the release of its upcoming movie "The Interview."

And some, like director Judd Apatow, are pointing out that Rudin and Pascal considered these conversations to be private. But there's certainly a different privacy expectation with work email than personal.

The Washington Post dryly advises: "Folks, if you're contemplating have a long, passive-aggressive (or outright aggressive) argument over a work matter, consider saving your best barbs for a series of lunches or phone conversations."

As for the Jobs movie, it isn't happening at Sony, but Universal has picked it up. As for Jolie's "Cleopatra" … well, we know Scott Rudin won't be involved.