Sony's PlayStation Vue Is Like A No-Cable Version Of Cable 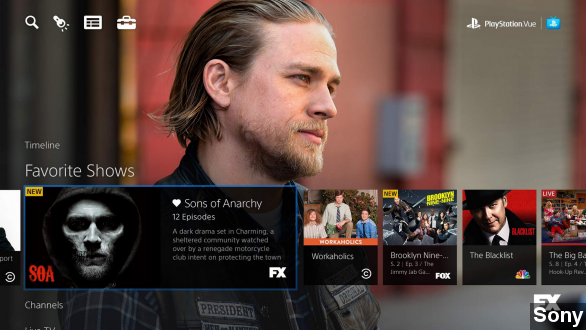 By Jake Godin
November 13, 2014
Sony unveiled plans for a competitor to traditional cable, the Playstation Vue app, a contract and cable box-free TV subscription for the Playstation.
SHOW TRANSCRIPT

Ever wish you had Netflix, TiVo, and a normal cable subscription all rolled into one? Sony plans to bring people just that with PlayStation Vue.

Somewhat like a virtual cable box, PlayStation Vue will let subscribers watch one of around 75 TV channels from an app on their PlayStation 3 or 4, and eventually, iPads. (Video via Sony)

So far, the Japanese company says it's partnered with networks such as Discovery Communications, CBS, Fox, NBCUniversal, Scripps Networks Interactive and Viacom. (Video via Sony)

The service, announced Thursday, will be based on a monthly subscription with no need for a cable box or any contract. Subscribers can watch any shows aired within the past 28 days.

So while companies like Netflix and Hulu are challenging traditional cable companies with streaming services, Sony has apparently decided to try to beat them at their own game.

But if you’re wondering how much this newfangled cable service will cost you, you’re out of luck for now.

Sony hasn’t mentioned any pricing, but The New York Times points out media executives are guessing it’ll be around $60.

And as disruptive as PlayStation Vue might sound to cable giants, Businessweek says the restrictions on how long viewers can store shows and the absence of major channels like ESPN or HBO will hamper its reach.

PlayStation Vue will be available on PS4 and PS3 consoles for beta testing through invites in New York City initially, followed by Chicago, Philadelphia and Los Angeles.

This video includes an image from Getty Images and an image Mr. TinDC / CC BY ND 2.0.