Sony's Pascal: 'All I Did Was Get Fired' 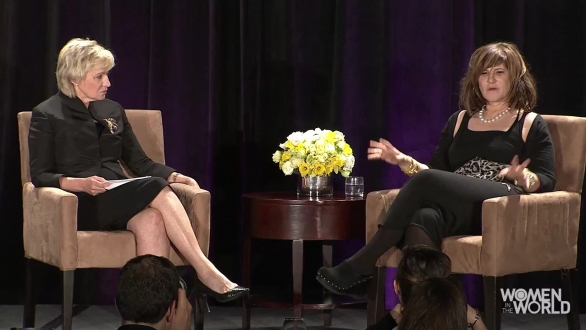 And now we know why. When Amy Pascal stepped down as co-chairman of Sony Pictures Entertainment earlier this month, she was apparently fired.

That's Pascal at the Women in the World conference Wednesday, speaking publicly for the first time about the massive hacks that thrust her emails into the spotlight.

Email exchanges in which producer Scott Rudin called Angelina Jolie a "minimally talented spoiled brat" and ones in which the two made jokes about President Obama that were called racist and insensitive.

She did apologize for those emails.

But nonetheless, earlier this month we learned she would no longer be Sony's co-chairman. Most suggested she'd been pushed out because of the public fallout over her emails.

But we couldn't be sure because Sony is reportedly funding a production company for Pascal. Pascal herself released a statement saying she was "energized" to begin a "new chapter" at Sony.

She'd had successes with films like "The Social Network" and "21 Jump Street" and was considered one of the industry's top execs before the hack coverage.

So Pascal telling Brown "All I did was get fired" is confirmation of what many suspected in the first place. Pascal did say she learned a lesson from the whole experience — that you should always tell people to their faces how you feel about them.