Sony's 'Last Guardian' Has Been A Long Time Coming 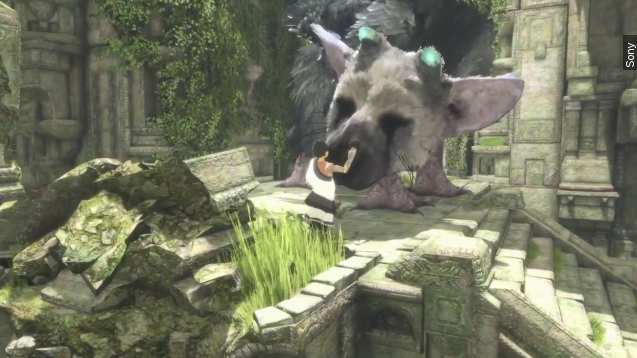 With a seven-minute video Monday, Sony brought a more than seven-year saga one step closer to ending. (Video via Sony)

The company unveiled a video showing gameplay from "The Last Guardian," which has been in development since 2007. (Video via Sony)

Or maybe we should say "re-unveiled," seeing as the game's been presented not once, not twice, but three times since then.

It's all been part of the game's journey from when the first video of the game, then under the moniker "Project Trico," was released in 2009 by PlayStation LifeStyle. (Video via Playstation Lifestyle)

Sony followed that up with another trailer at E3 that year, which basically showed the same course of events but with some stylistic differences. (Video via Sony)

With yet another trailer at 2010's Tokyo game show, the game looked set to be released in 2011 — a reasonable turnaround for developer Team Ico, which produced "Shadow of the Colossus" and "Ico," among others. (Video via Sony)

But then it all started to fall apart. In early 2011, the game's designer, Fumito Ueda, said he was still working over design issues, but it would still be released by the end of that year. (Video via IGN)

Then, that December, Ueda abruptly left Sony, and while he committed to finishing the game in a freelance capacity, his departure marked the start of some serious doldrums for "Guardian."

The game didn't show up at E3 in 2012, and the biggest news to break about the game that year was that its trademark in the U.S. had expired. (Video via GameSpot)

Similar absences from E3 in 2013 and 2014 left fans with nothing beyond Sony higher-ups saying the game was still in development.

So when Sony's North American chief Shawn Layden said, "Our first game tonight has been long anticipated by the gaming community," that was a bit of an understatement. (Video via IGN)

But that long delay could end up costing "The Last Guardian," as an explosion of indie games has filled the niche of intimate, emotional games like "Guardian." (Video via 505 Games / "Brothers: A Tale of Two Sons," Ubisoft / "Valiant Hearts")

Kotaku's Evan Narcisse explained: "When Sony confirmed the game's existence in 2009, the video game landscape looked different. ... Since then, other games have come out and fulfilled the component wishes I had for Team Ico's long-brewing PlayStation game."

Still, there's also a chance the anticipation could lead to a cathartic effect among fans when the game comes out. When, during the same press conference, Sony announced a sequel to "Shenmue II" — 14 years in the making — people cried. (Video via Eurogamer)