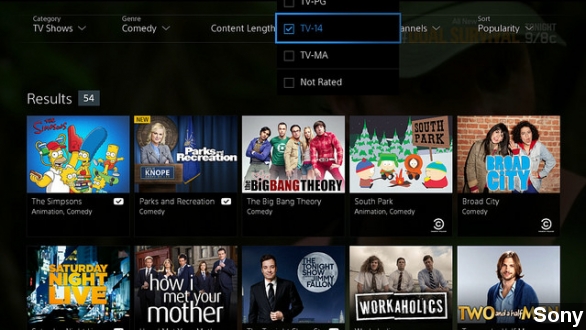 Apple and Dish Network aren't the only companies vying for those valuable cord-cutter dollars; now Sony is trying its hand at Web TV.

In a blog post on Wednesday, the company announced the launch of "PlayStation Vue," its subscription-based live and on-demand TV service. (Video via Sony)

It's currently only available in Chicago, New York City and Philadelphia, but Sony says it's "working hard to deliver [the service] to more cities soon."

It's also only accessible through the company's game consoles, the PS3 and PS4. Sony says iPad owners can look forward to PlayStation Vue "in the near future." (Video via YouTube / PlayStation)

So how does Sony's system stack up to the competition?

The fact it's limited to three cities doesn't do it any good, but it has up to 84 channels, which is a step above Sling TV's offerings. And, of course, we can't yet compare it to the lineup on Apple's still-unannounced, rumored streaming service.

Where it really fails to compete, though, is sports entertainment. It does offer Fox Sports channels, but ESPN is a no-go. Which, of course, also means no ABC. (Videos via Fox Sports, ESPN)

Which, of course, also means no "Scandal." And that's a scandal. (Video via ABC / "Scandal")

Scandal or not, it's clear we'll be weighing our options even more in the near future. The New York Times quotes one television executive who says Web TV is "a revolution," and predicts, "there are some seismic shifts that will occur."

Web TV is coming. Are you prepared to cut the cord?