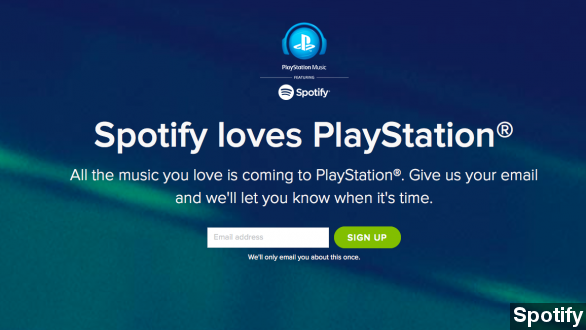 Sony is dropping its homegrown Music Unlimited service in favor of Spotify.

The new PlayStation Music service will be available for PS3, PS4 and Xperia smartphone users. Listeners will be able to link their PlayStation Accounts to Spotify and stream in the background while games run on their consoles. (Video via TechCrunch)

This is something of an ignoble end for Music Unlimited, which Sony execs had high hopes for when it debuted in 2011.

One Sony executive complained to The Age at the time: "Publishers are being held to ransom by Apple, and they are looking for other delivery systems."

Sony had even planned to pull its label's music from iTunes if Music Unlimited gained traction. But two years into its life, it had gathered little more than a million users.

For what it's worth, the numbers suggest Spotify is one of the safer bets in the streaming music industry. CNET reports the service hit 60 million monthly active listeners earlier this year.

And a reporter at GottaBeMobile sees another potential silver lining if Sony's hardware has exclusive access to Spotify's services, writing, "That'd definitely be a big blow to the Xbox One."

Music Unlimited will shut down everywhere on March 29. Sony is planning an initial launch for PlayStation Music in 41 countries.