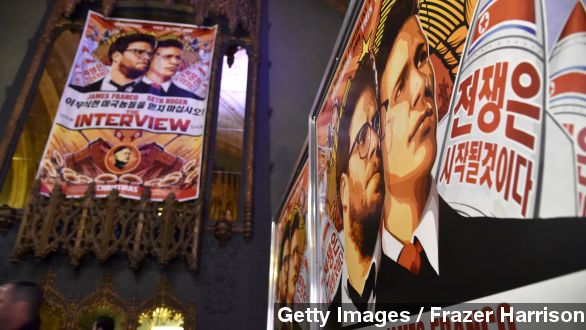 They're now threatening movie theaters that screen Sony's "The Interview," which opens in wide release this Christmas. (Video via Sony Pictures Entertainment / "The Interview")

Or at least that's what this message obtained by Variety seems to indicate. It reads, in part: "Remember the 11th of September 2001. We recommend you to keep yourself distant from the places at that time. (If your house is nearby, you'd better leave.)"

The hackers specifically mention the film's premiere. Although the film's L.A. debut went as planned last week, Sony does have another screening in New York City this Thursday.

On Monday, Sony reportedly scaled down plans for that premiere in response to the cyberattacks.

And Tuesday, BuzzFeed reported the film's stars — James Franco and Seth Rogen — were pulling out of all their planned media appearances.

That's just part of the fallout from the series of cyberattacks launched by hackers calling themselves "The Guardians of Peace," who many believe are really just sponsored by North Korea.

This summer, the Hermit Kingdom vowed to "mercilessly" retaliate should Sony release "The Interview," which depicts a plot to assassinate Kim Jong-un. (Video via Euronews)

Kim can at least take comfort in the fact that the film's reviews are in, and they're not pretty. Variety likens "The Interview" to "cinematic waterboarding."

This video includes images from Getty Images and Sebi Ryffel / CC BY SA 2.0.