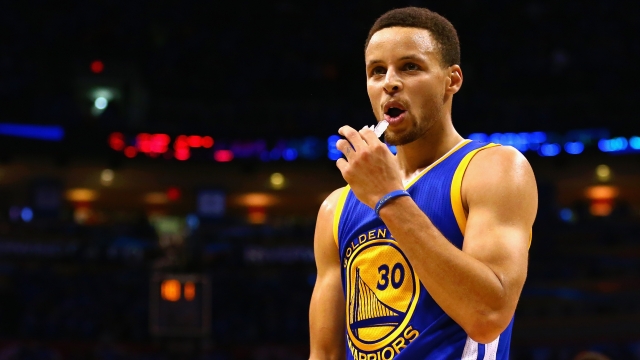 SMS
Someone Spent Nearly $60,000 On 2 NBA Conference Finals Tickets
By Matt Moreno
By Matt Moreno
May 30, 2016
The Golden State Warriors and the Oklahoma City Thunder are heading to Game 7 of the Western Conference finals.
SHOW TRANSCRIPT

The best team in the NBA this year is heading to a Game 7, and there's definitely going to be some must-see action.

So somebody reportedly dropped nearly $60,000 on two tickets to the game.

ESPN reports tickets listed by the Golden State Warriors for Game 7 against the Oklahoma City Thunder sold out in minutes.

Eventually, two floor-seat tickets hit the secondary market. They were quickly snatched up at $29,000 a pop.

Yeah, at that price you could buy a brand-new luxury car, send a kid through four years of college or a number of other things. But this anonymous buyer isn't the only big NBA ticket spender.

That $29,000 price tag barely covers another popular game this year — Kobe Bryant's last game before retirement. Someone purchased a pair of courtside tickets to that sold-out game at $27,500 apiece.

Regardless, seeing Monday night's action in person will make a dent in your wallet one way or the other. The cheapest tickets first listed by the Warriors were $230.

This video includes clips from the Los Angeles Times and KPIX and images from Getty Images.