Someone Donated A Selfie Statue To This Town, And Locals Aren't Happy 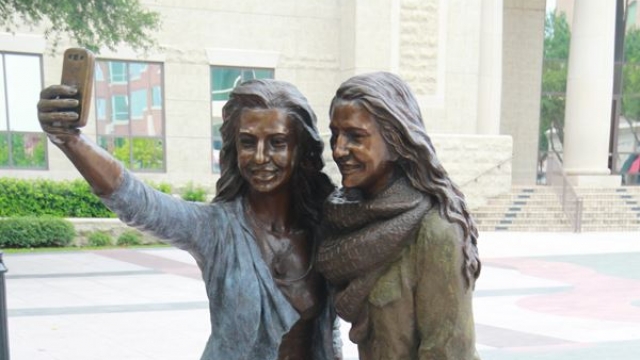 SMS
Someone Donated A Selfie Statue To This Town, And Locals Aren't Happy
By Katherine Biek
By Katherine Biek
June 1, 2016
The statue is one of 10 that a local resident gave to the town of Sugar Land, Texas.
SHOW TRANSCRIPT

No, your eyes aren't deceiving you. This really is a statue of two women taking a selfie.

And it's been placed right outside the City Hall building in Sugar Land, Texas.

It's one of 10 statues a local resident gifted to the city, each one depicting a different activity people often do around Sugar Land.

Besides the selfie-taking statue, one of a man playing guitar was also installed near City Hall.

But many people on social media seem to be saying the selfie statue isn't a good representation of Sugar Land or its residents.

One woman even says she was "embarrassed for everyone."

A WFAA reporter pointed out the statue of the women is about as stereotypical as it gets, right down to the rain boots, infinity scarves, optimal positioning of the phone and "the quasi-squat, because standing normally just doesn't cut it."

The City Council and several citizen committees approved the statues for donation in 2014.

According to City Council agenda notes from that year, the estimated value of both the selfie statue and the one of the man playing guitar is about $32,000.

This video includes images from Sugar Land Parks and Recreation and City of Sugar Land.