Somehow, The State Of The Union Is Always Really 'Strong' 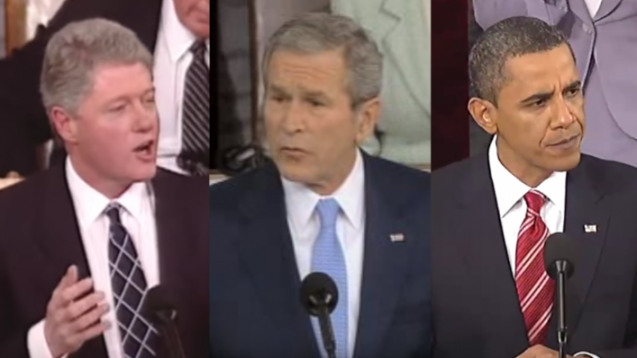 SMS
Somehow, The State Of The Union Is Always Really 'Strong'

By Elizabeth Hagedorn
January 12, 2016
No matter the country’s condition, presidents tend to describe the Union's state as "strong."
SHOW TRANSCRIPT

The state of our Union has never been stronger," President George W. Bush said in 2002.

No matter the country’s condition, "strong" (or some variation of it) has become the go-to word for modern presidents delivering their State of the Union addresses.

"As we gather here tonight, the state of our Union is strong," President Ronald Reagan said in 1983.

Presidents prior to Ronald Reagan didn’t always resort to this cliche.

"The state of our Union is sound," President Jimmy Carter said in 1978.

Some got pretty creative when filling in that blank.

"This, then, is the state of the Union: Free and restless, growing and full of hope," President Lyndon B. Johnson said in 1965.

"The state of our Union is the union of each of us, one to the other — the sum of our friendships, marriages, families and communities," President George H.W. Bush said in 1991.

Others were more candid.

"The state of the Union is not good," President Gerald Ford said.

But the most blunt description probably came from James Buchanan who, in the buildup to the Civil War, described the Union as "threatened with destruction." Needless to say, he did not seek re-election.