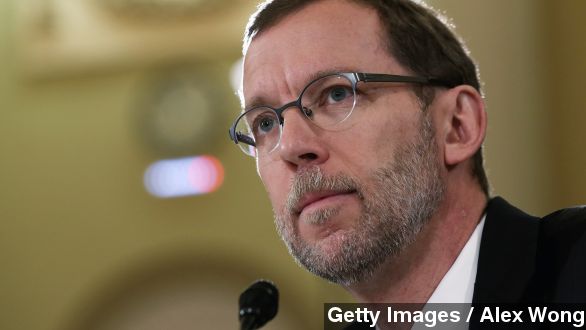 SMS
Some Republicans Want Different Math On Capitol Hill
By Zach Toombs
By Zach Toombs
December 22, 2014
Bloomberg reported Monday that the leader of the Congressional Budget Office is likely on his way out, set to be replaced by incoming Republicans.
SHOW TRANSCRIPT

Some lawmakers want to change the way Congress does math.

The GOP will control Congress in January — the House and the Senate. (Video via C-SPAN)

And this guy might be out of a job because of it. His name is Douglas Elmendorf, and he's the head of the Congressional Budget Office, which runs numbers for lawmakers, calculating the economic impact of certain policies. But there's some debate over how the CBO does its math.

President Obama, in a speech at The White House, said, "What I will not do is to have a process that is vague, that says we’re going to sort of, kind of raise revenue through dynamic scoring."

Dynamic scoring: economic predictions that consider how a change in fiscal policy would influence economic behavior.

That definition on its own isn't really the controversial part of dynamic scoring. What's controversial is the idea held by some conservatives that when we cut taxes, we can prompt enough economic growth to keep the same amount of revenue coming into the government, maybe even more. When not accounting for that economic growth, you'd assume lower taxes would just mean lower revenue.

But lawmakers like Paul Ryan want the Congressional Budget Office to use this theory when predicting the economic impact of new fiscal policies. That would make it easier for Congress to sell tax cuts to the American public.

Which brings us back to Douglas Elmendorf, whose term as the head of the CBO is up in January.

David Weigel at Bloomberg reported Monday, "Incoming Republican leaders in Congress won't reappoint Doug Elmendorf," instead appointing someone who will use dynamic scoring.

Despite the fact that many conservatives and economic experts from the Bush White House support Elmendorf and call him fair to all sides, incoming House Budget Chairman Tom Price and other Republicans want someone who will score tax policy differently. And soon they'll be able to put that someone at the head of the Congressional Budget Office.

This video includes images from Getty Images and music from Musopen.org and Bensound / CC BY ND 3.0.