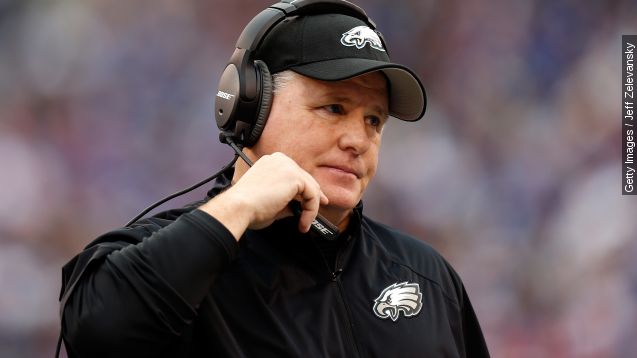 It's no secret Philadelphia Eagles head coach Chip Kelly is some sort of offensive mastermind.

Over the course of the offseason, he's pieced together what many expect to be one of the better offenses in the league.

The only problem is Kelly has had issues with people of color, according to a few NFL players.

Shortly after being traded from the Eagles to the Steelers, cornerback Brandon Boykin said Kelly is "uncomfortable around grown men of our culture." Boykin later clarified his comments:

"I'm not saying he's a racist in any way. I'm just saying, as a player, I wanted to be able to relate to my coach a little bit better," Boykin said.

These comments come after former Eagles offensive lineman Tra Thomas said players felt there was a "hint of racism" behind Kelly's decisions, and running back LeSean McCoy said in May that Kelly "got rid of all the good players. Especially all the good black players."

"I'm not governed by the fear of what other people say," Kelly said in a press conference in May.

Kelly has denied these accusations, and Eagles players have defended their head coach through it all. Kelly's problem might just be communication. The former University of Oregon head coach has long been known as a private man.

It wasn't until a recent Washington Post story that it was revealed Kelly, long thought to be single, was once married for seven years. The story says many of his coaches, players, bosses and others barely even know him on a personal level.

The Philadelphia Inquirer echoes that, saying, "After more than two years as the Eagles coach, few — if any — have been able to penetrate a wall built around family, friends, and colleagues who have been protective of Kelly's privacy."

"Because he's wired so differently, ... I  think a lot of players probably have a tough time relating to Chip. ... I think sometimes guys have to look within themselves and say, 'Have I done enough to understand who my head coach is?'" CSN Phildelphia reporter Geoff Mosher said.

Kelly is a man who loves the X's and O's and not so much the Q and A's. All this chatter will likely die down come the regular season, when Kelly and his team are focused on just one thing: winning.

This video includes images from Getty Images and music by Birocratic / CC by 3.0.