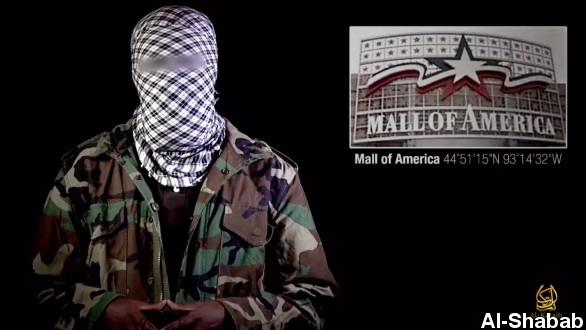 "What if an attack happened on the Mall of America?" says a masked person in a recently released video.

The Department of Homeland Security is advising shoppers to be on heightened alert after a video posted by Somali terror group Al-Shabab threatened attacks on Western malls.

Al-Shabab is the same terror group responsible for the 2013 Westgate Mall terror attack in Nairobi, Kenya. That attack involved multiple gunman and left more than 60 people dead. (Video via CBS)

"What we're telling the public in general is you've got to be vigilant. ...  If anyone is planning to go to the Mall of America today, they've got to be particularly careful," said Homeland Security Secretary Jeh Johnson Sunday on CNN.

Al-Shabab recruitment is a big concern in Minnesota, which has the largest Somali population in the country. U.S. officials say since 2007 over 20 Somali-Americans from Minnesota have traveled overseas to fight with Al-Shabab and, in some cases, ISIS.

Johnson says increased security, especially at Mall of America, will be in place following the threats. (Video via NBC)