SolarCity Thinks It Can Replace 5 Million Roofs With 'Solar Shingles' 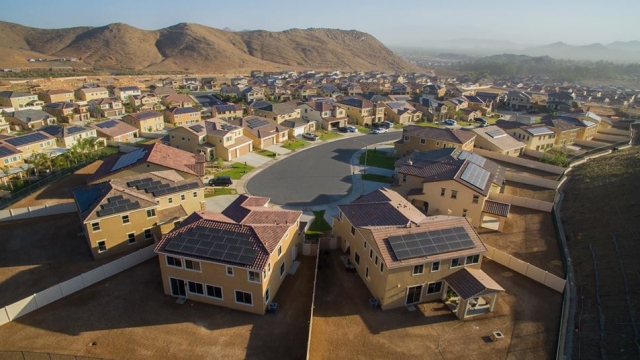 SolarCity thinks it can convince 5 million American households to replace their roofs with solar energy shingles.

Instead of installing panels like these on top of an existing roof, the company is working on "solar shingles" that would replace a home's roof and absorb solar energy.

About 1 million Americans have solar panels on their homes, so adding another 5 million to that list would be quite the accomplishment.

But the company seems to think the solar shingles can fix some of the biggest problems associated with solar energy.

And Musk says installing or replacing the solar shingles shouldn't be much different than when using regular roofing materials.

But the company will still need to keep costs down if it wants to see mainstream adoption.

The Dow Chemical Company recently had to discontinue its line of solar shingles because the product wasn't selling — likely because they were more expensive and less efficient than typical solar plants.

But SolarCity isn't talking about price or its energy output yet.

Right now, it's in the middle of a merger with Tesla Motors, which could open up the option to package the solar shingles with Tesla products like the home battery. That could make the adoption process for solar roofing easier and cheaper.