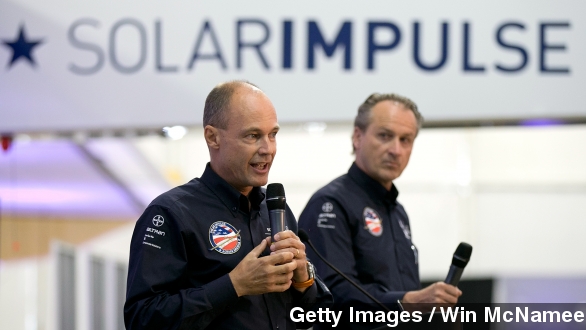 SMS
Solar-Powered Plane To Make First Trip Around Globe
By Ben Lawson
By Ben Lawson
March 8, 2015
The Solar Impulse 2 will start its journey around the world Monday, marking a big test for solar-powered planes.
SHOW TRANSCRIPT

Monday will mark the beginning of the first journey across the globe for a solar-powered plane. If weather permits, the Swiss-engineered Solar Impulse 2 is scheduled to take off from Abu Dhabi Monday. Its journey will cover more than 21,000 miles.

Since the plane has room for only one person, Bertrand Piccard and André Borschberg will swap piloting duties at each of the 12 planned stops and log about 250 hours of flight time each.

The pilots admit they aren't sure if the journey will be a success, but they say it's worth it to test the technology.

"No one has ever been able to fly about the world on a solar airplane, and if we don't try, we will never make it," said Piccard.

The Solar Impulse 2 is especially light. The plane weighs about the same as a Volvo sedan and, to conserve energy, travels at comparable speeds.

Some legs of the journey will take several days. Because the aircraft can carry only one person, the pilots will need to stay alert nearly the whole time and take short naps of about 20 minutes.

To accommodate the solar panels on its wings, the Solar Impulse 2 has a huge wingspan of 236 feet. That's longer than commercial planes, such as the Boeing 747.

The plane is capable of storing energy so it can fly at night, but flights will be limited to safe weather conditions.

"With scientific exploration, I want to inspire others to also achieve the impossible," said Piccard.

Borschberg and Piccard say the technology can't yet keep up with the demands of commercial air travel, but they are hoping the Solar Impulse project will pave the way for more zero-emission flights.

Currently, aviation accounts for more carbon emissions per passenger than any other form of mass transportation and is the fastest growing source of greenhouse gases. (Video via San Francisco International Airport)

The Solar Impulse 2 will make stops in the U.S., India, China, southern Europe and northern Africa before returning to Abu Dhabi in July.