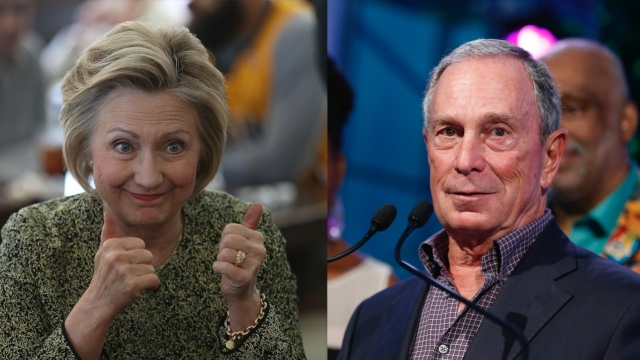 Bloomberg — who was considering his own run for president earlier this year — is an independent with a history of switching parties. He was a Democrat until he ran for mayor and switched to the Republican Party, which he also later left.

Bloomberg has said he bases his endorsement decisions on how candidates align with the issues he cares about, not which party they belong to.

Even when it comes to presidential endorsements, Bloomberg has a history of bipartisanship. In 2004, he endorsed Republican George W. Bush over his opponent John Kerry, but in 2012, he endorsed Democrat Barack Obama.

In recent years, Bloomberg has aligned more with Democrats on issues like gun control, climate change and LGBTQ rights.

On fiscal issues, he's more conservative and is opposed to a few of the economic issues adopted by the Democratic Party this year.

"Some of the policies are misguided. I, for example, am not in favor, have never been in favor, of raising the minimum wage," Bloomberg told Bloomberg News.

Bloomberg has been increasingly disappointed with Donald Trump and his views on immigration and the economy.

SEE MORE: For Some Conservatives, #NeverTrump Has Nothing To Do With Winning

A senior adviser to Bloomberg told the New York Times that he would endorse Clinton "from the perspective of a business leader and an independent," not using the standard Democratic message.

That could be a big boost for Clinton's image among more fiscally conservative voters, since Trump has been touting his background as a businessman as a central aspect of his campaign.

This video includes images from Getty Images and clips from Donald J. Trump for President Inc. Hillary for America, Bloomberg, CNN and the Council on Foreign Relations.