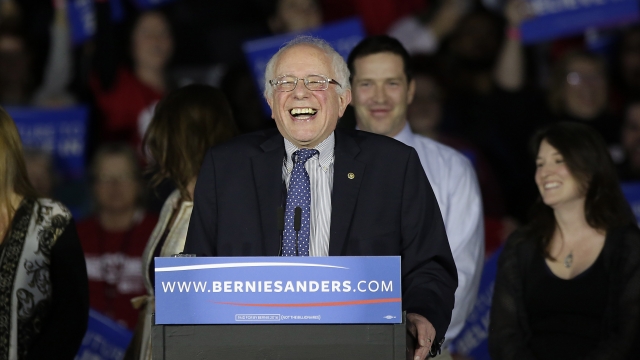 SMS
Socialism Also Won The Iowa Caucuses
By Kate Grumke
By Kate Grumke
February 3, 2016
In a poll leading up to the caucuses, more Iowa Democrats said they identified as socialist than capitalist.
SHOW TRANSCRIPT

For Bernie Sanders, the virtual tie in Iowa was as good as a win.

"What Iowa has begun tonight is a political revolution," Sanders said.

But there may have been another winner: socialism.

We tried to find some socialists at a Hillary Clinton rally, but didn't have much luck.

"Oh god. ... I don’t know about that question. Can I pass on that one?" one voter said."I think there's gonna be a problem with the general electorate as far as anything labeled socialist," another said."I don't know; I just think everything Hillary stands for I like," said another.

At a Sanders rally, it was easy to find self-described socialists.

"People are fed up with the rich controlling everything, and they want the wealth to be for everyone," a supporter said."I think capitalism hasn't really been working for a lot of people," another said."The statistics coming out of Europe are far better than what we have. Why not try it?" another suggested.

"I think we should look to countries like Denmark, like Norway, like Sweden, and learn from what they have accomplished for their working people," Sanders said.

But some of his supporters are comfortable with the word.

"People associated it with communism and it wasn't something you would tell your employer. ... I really give Bernie credit for keeping the topic in the light," someone said."I think socialism's a good idea that got a bad name because it was associated with a dangerous country, ... but our generation didn't grow up with that," a person said."Beloved American programs are socialist and it shouldn't be a word that we’re afraid of," said a supporter.

But these are primary voters — usually more ideological than the general public.

So now the question is this: Can Sanders sway the general public?