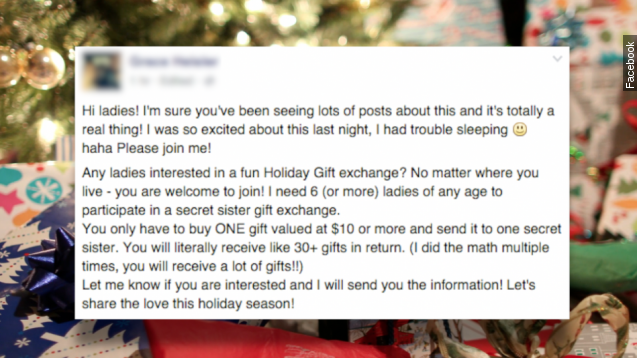 Secret Santa can be a fun way to spice up the holidays by exchanging random gifts with friends or co-workers, but officials are warning that an invitation to exchange presents with a "secret sister" is nothing more than a scam.

Plenty of Facebook and Instagram users have seen posts inviting them to send in $10, promising they'll receive up to 36 gifts in return.

Not only will your "Secret Sister" almost certainly not get you anything, that type of hoax is also illegal.

The U.S. Postal Inspection Service issued a statement saying it's against the law to "request money or other items of value and promise a substantial return to the participants."

And if the scam feels familiar, Snopes says it's "simply a repackaging of age-old chain letter gifting schemes, the pitfalls of which are both well-known and about as ubiquitous as the practice itself."