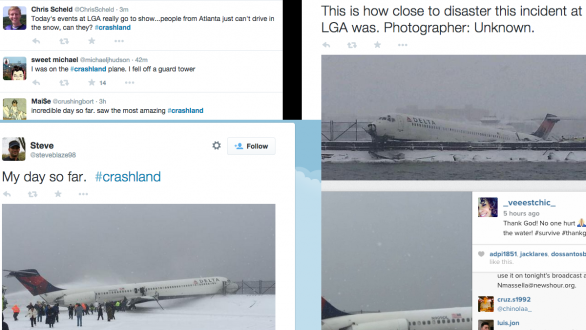 SMS
Social Media Posts Show LaGuardia Plane's Close Call
By Cliff Judy
By Cliff Judy
March 5, 2015
The crash landing of a Delta flight at LaGuardia was an undeniably close call, but officials have said there were no serious injuries.
SHOW TRANSCRIPT

More than 100 people on a Delta flight headed to LaGuardia Airport say they're extremely thankful for the hill their plane crashed into. That's right, they're happy their plane hit a hill head-on.

That's because if it had skidded any farther in Thursday's snowstorm, Flushing Bay was waiting on the other side. New York's most famous airport essentially sits on the East River.

"We almost all got friggin' killed landing on the damn tarmac," a passenger said on Instagram.

The landing luckily didn't cause any serious injuries, and that video and other pictures circulating on social media were essentially the visuals New York media ran with since crews were stuck at the terminal. (Video via WNBC)

One passenger on the flight from Atlanta told the New York Post: "We came in for landing, the plane hit the ground. As it started to apply the brakes, it started skidding. It didn’t spin around or anything."

And as both passengers and first responder enthusiasts pointed out, the incident certainly could have been worse if not for the hill.

It's not like the pilot softly touched down on the Hudson to save everyone on board. (Video via CBS)

The crash landing did shut down LaGuardia at least through the afternoon, which will no doubt cause some small ripples across the travel industry. An aviation expert told WABC keeping the airport open would be bad form.

"You just cancel and say, 'Okay, we don't need to create anxiety for people,'" the expert said.