Soccer's US Popularity Grows, But Mainly For Europe's Game 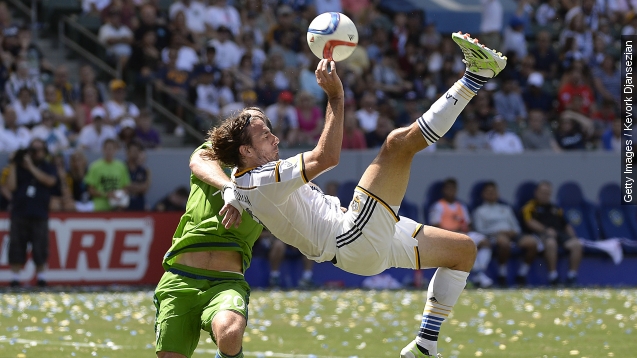 SMS
Soccer's US Popularity Grows, But Mainly For Europe's Game
By Ryan Biek
By Ryan Biek
August 23, 2015
Is soccer becoming a major sport in the U.S.? The answer might depend on what league we're talking about.
SHOW TRANSCRIPT

Did you know Major League Soccer's regular season will be over in just about two more months?

Soccer is growing in the U.S., but how much of its growing popularity is being channeled into America's professional league?

No doubt, MLS executives were thrilled with the record 539,000 viewers who tuned in for ESPN's coverage of 2015's MLS season debut.

Contrast that with the Premier League's opener — which aired at 7:45 a.m. Eastern time on NBCSN and still drew 626,000 American viewers.

And the more schedule-friendly 12:30 game on NBC later that day drew roughly a million viewers.

Although the MLS season debut got a record number of viewers, so did the Premier League. Even as it grows, interest in the game is still dominated by foreign leagues.

But TV viewership alone might not be telling the whole story, especially because the Premier League is the most popular league in the world.

Despite being younger than the NBA and NHL by 49 and 78 years respectively, the MLS has had a higher average in-stand attendance than both leagues.

And networks combined to make a $90 million deal last year for broadcasting rights, a sum roughly three times as much as the league's previous deal.

MLS is also gaining in a key demographic: viewers under 34-years old, which sits at 40 percent. Meanwhile baseball's number of viewers 55 or older is growing, currently at 50 percent.

And yes there's a gap in TV viewership, it's not as wide as you make think it is. While MLS' average TV viewership has hovered around 220,000 in recent years, the major four American sports leagues average 342,000 viewers.

Correction: A previous version of this video said the MLS regular season ends in early September. It ends Oct. 25. The video has been updated.