So You Want To Join A March Madness Pool: A Guide For Rookies 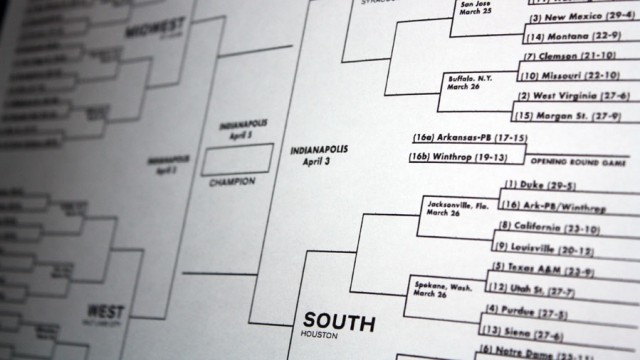 So you want to join a March Madness pool?

Joining a March Madness pool can be a fun way to enjoy one of America's most exciting sporting events, but newcomers might find it a bit confusing or intimidating. Here's what rookies should know.

The March Madness tournament has 68 teams, which are whittled down to 64 after the "First Four," a few play-in games which usually aren't scored in March Madness pools.

The field is then divided into four regions — the East, South, Midwest and West — and each team in the region is seeded, from the top dogs at No. 1 all the way down to No. 16.

So which teams should you pick? Well, there's a reason it's called March Madness, but there are a few decent guidelines based on how a team is seeded going into the tourney.

Things get dicey after that. A No. 5 seed moves on less than two-thirds of the time, meaning most folks have one or two 12 seeds moving on in their brackets. And by the time you get to the game between Nos. 8 and 9, it's basically a coin flip.

It's a good idea to put one or two No. 1 seeds in your Final Four, but don't go overboard. A University of Illinois study says it's nearly 10 times more likely for zero No. 1 seeds to make the Final Four than for all the No. 1's to make it there.

So keep all that in mind when you fill out your bracket. But remember, you can always just pick teams based on the best-looking uniforms. We won't judge.