So What Do Iran's Neighbors Think Of The Nuclear Deal? 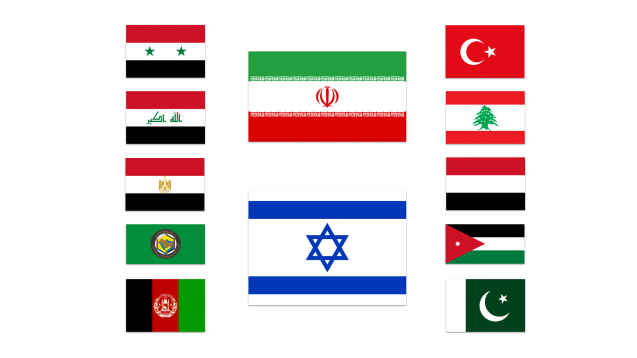 SMS
So What Do Iran's Neighbors Think Of The Nuclear Deal?
By Jake Godin
By Jake Godin
August 7, 2015
It's easy to figure out what the main players involved in the Iran deal think of it — but what about those it might impact the most, Iran's neighbors?
SHOW TRANSCRIPT

What do Iran’s neighbors think of the nuclear deal?

Iraqi Prime Minister Haider al-Abadi said, "The Iran Deal expresses a common will to bring peace and security to our region."

Syria's President Bashar al-Assad went with, "[The nuclear deal is an] unequivocal recognition by the world countries of the peacefulness of the Iranian nuclear program." (Video via Presidency of the Syrian Arab Republic)

Qatari Foreign Minister Khalid bin Mohammed al-Attiyah, speaking for the GCC, said,  "This was the best option among other options — to come up with a solution … through dialogue."

Afghanistan’s president congratulated Iran on the agreement, and said he welcomed any efforts to improve the security of the region. (Video via Press TV)

Pakistan welcomed the agreement as well, saying it would "auger well for peace and security in our region."

Turkey’s official response welcomed the deal. Although it may not be great for Turkey’s foreign policy in the long run. (Video via Presidency of the Turkish Republic)

In Lebanon, optimists such as the prime minister, say the deal will ease regional tensions. Though some pessimists fear the deal may empower Iranian-backed Hezbollah militants. (Video via Sky News)

Yemen is somewhat split. The Iran-backed Houthi government called the agreement a “landmark deal”. The internationally-backed Yemeni government-in-exile has yet to comment. (Videos via Al Masirah TV & Saudi TV Channel 2)

King Abdullah II of Jordan didn't really indicate a side, instead simply saying he didn't see any "negative impact" from Iran deal.

And Egypt's Foreign Ministry released a middle-of-the-road statement saying it "expressed hope that the deal between both sides is complete and prevents an arms race in the Middle East."

And of course, Israeli Prime Minister Benjamin Netanyahu had his own words to describe the deal. "What a stunning, historic, mistake."