So, The GOP Might Change Its Stance On Gay Marriage 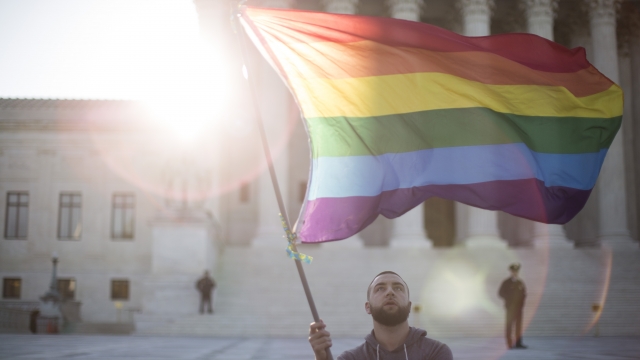 "Most Americans agree that in this country as a legal and historical and religious union, marriage has to have the definition of one man and one woman," Reince Priebus, chairman of the Republican National Convention, told "Meet the Press" in 2012.

It appears the GOP won't try to push for a constitutional amendment defining marriage anymore.

CNN — which claims to have received a draft of the party platform ahead of the Republican National Convention — reports the party would leave it up to the states. But the platform would still say the government should recognize marriage as between a man and woman and "actively promote married family life as the basis of a stable and prosperous society."

And it would still call for a reversal of the Supreme Court's decision last year that legalized same-sex marriage.

The news comes just days after CBS reported a group of platform committee members want to change the party's language to "equality language."

Other changes to the platform include emphasis on "trade agreements that put America first," which seems familiar.

"On trade, on immigration, on foreign policy, we are going to put America first again," Donald Trump said at a June 28 campaign event.

This video includes clips from C-SPAN, CBS and ABC, and images from Getty Images.