So Much For The Recovery In Oil Prices 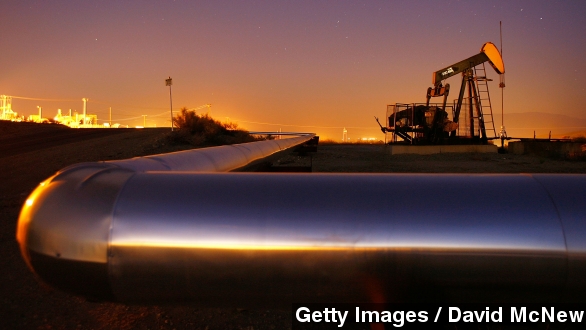 SMS
So Much For The Recovery In Oil Prices
By Cliff Judy
By Cliff Judy
March 14, 2015
A report from the International Energy Agency Friday warned of continued instability in oil prices, and prices soon dropped to nearly a six-year low.
SHOW TRANSCRIPT

For those figuring February proved oil prices couldn't drop past a certain point, welcome to March.

The International Energy Agency released its latest Oil Market Report Friday, warning what appeared to be the stabilization of oil prices is still "precarious."

The agency wrote, "Behind the façade of stability, the rebalancing triggered by the price collapse has yet to run its course, and it might be overly optimistic to expect it to proceed smoothly."

Following the report, crude oil and Brent crude oil prices both dropped to roughly $45 and $55 a barrel, respectively. While the prices had rebounded briefly in February, the two benchmarks slid roughly 10 percent this week and approached their lowest prices in six years.

There are several reasons the IEA doesn't believe we've hit the floor yet — the ongoing glut in the world's oil supply being the overarching theme here. While U.S. shale oil producers have dropped the number of rigs in operation, that still hasn't put a significant dent in our oil output. (Video via Journeyman Pictures & The Telegraph)

In November, OPEC opted against cutting its production to bring prices back up. Much of the motivation there came from oil-rich nations like Saudi Arabia, which refused to give up market share and can afford to sit on massive savings. And Kuwait's OPEC governor said just this week she doesn't expect the conglomerate to change that supply policy at its next scheduled meeting in June. (Video via RT)

But not all of OPEC's members or other countries worldwide can take the prices. The Wall Street Journal has a list of the OPEC members and the oil prices necessary for them to balance their 2015 budgets.

IEA wrote, "Producer countries that depend on high oil prices and that do not enjoy large buffers will find it hard to balance their budget and fund social spending programs at current prices. That is not a recipe for social stability."

The oversupply has become so significant in the U.S., storage for oil reserves is running out and leading some consultants to speculate the price of a barrel of crude could drop to $30. Just this week, sources told Bloomberg nearly a dozen drilling executives met with President Barack Obama, asking the president to lift the 40-year ban on U.S. oil exports to ease the glut and the storage problem.

Such a significant shift in oil prices should affect gas prices, though the trickle down effect from barrels to the pump usually takes a couple of weeks.

Of course, the world markets are reacting to the IEA's March report. This is the same organization that just last month said an oil price recovery looked inevitable and U.S. oil production would drop. We all see how that prediction went. (Video via International Energy Agency)

So what's really going to happen to the markets is, frankly, just not that clear.