So, Marco Rubio Is Going To Run For Senate After All 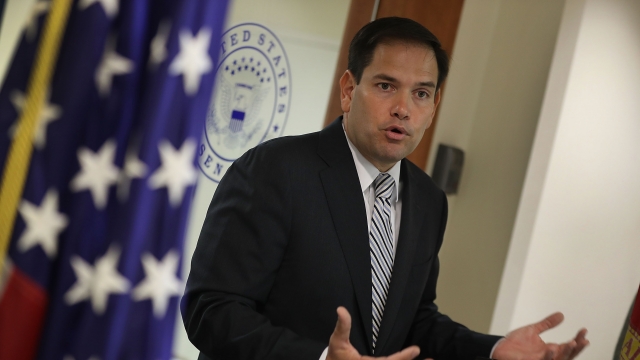 SMS
So, Marco Rubio Is Going To Run For Senate After All
By Matt Moreno
By Matt Moreno
June 22, 2016
Sen. Marco Rubio said after dropping out of the race for the Republican presidential nomination that he wouldn't run for re-election.
SHOW TRANSCRIPT

"I know people in politics don't like to admit they changed their minds, but I changed my mind. ... No matter who wins this presidential election, the Senate's role of being able to act as a check and balance on bad ideas from the president I think are going to matter more in 2017 than they perhaps ever have in our history," Rubio told Fox News.

It appears Sen. Marco Rubio of Florida will be running for re-election to his Senate seat after all.

Shortly after failing to even win his home state during the Republican presidential primaries, Rubio bowed out of the presidential race in mid-March — giving way to now-presumptive nominee Donald Trump.

"No, no. I'm not running for re-election to the Senate. As I said, I'm going to finish my term here, and then I'll be a private citizen," Rubio told reporters in March.

He swore off any chance of running for Senate again pretty soon after that, but he's apparently had second thoughts.

"When I make a decision, and I announce it, I will tell you, I promise," Rubio told CNN.

He repeatedly danced around the question when asked by a CNN crew earlier in the week.

According to several recent polls, Rubio currently leads against challenger Patrick Murphy in the race.

This video includes clips from ABC and C-SPAN, and images from Getty Images.