So Many International Players Got Picked In The NBA Draft 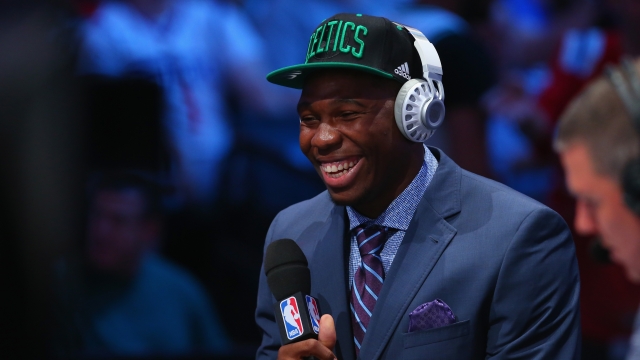 The 2016 NBA Draft was Thursday night, and it certainly didn't lack for international flair.

In all, 14 first-round picks — out of 30 — went to players who were born outside of the United States, a new NBA record.

This included a couple of players NBA fans have heard of, like No. 1 pick Ben Simmons, who was born in Australia, and college standout Buddy Hield, who's from the Bahamas and was taken No. 6 overall.

But eight of those 14 players didn't even go to college in the States. Guys like Georgios Papagiannis, Juan Hernangomez and Guerschon Yabusele.

The big name fans might not recognize is Dragan Bender. He's a Croatian prospect who plays in Israel and even though he's only 18, he's already over 7 feet tall. The Suns took him at No. 4.

This should come as welcome news for the NBA and its commissioner, Adam Silver, who's been pushing hard to expand the league's global reach. But not everybody is happy about overseas players getting drafted.

When the Kings unexpectedly picked Greek star Papagiannis at No. 13, their star player DeMarcus Cousins tweeted, "Lord, give me the strength."

Praying hands emoji aside, it's important to remember that this year's draft was thought to be pretty weak in terms of star talent, which means teams were more likely to take a risk on unproven foreign players.

The good news for the international players drafted is that the pressure to perform is a little less heavy this year. The Knicks were heavily criticized for drafting Latvian Kristaps Porziņģis last year, and he had a good enough season to prove those doubters wrong.