So Far, The DNC Has The Drama We Expected At The RNC 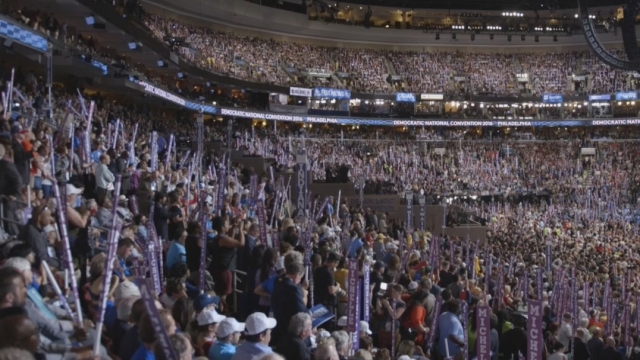 NEWSY'S KATE GRUMKE: Welcome to Night One of the DNC. Today was a really interesting day because the first thing I did was I went to a protest where people were smoking weed at the Philadelphia City Hall.

NEWSY'S EUGENE DANIELS: Just all out in public.

GRUMKE: I was at the RNC last week, and there's so many more protesters. It seems like they're a lot more organized here.

DANIELS: Well, it seems like they're a lot more upset than any of the protesters who were at the RNC.

GRUMKE: Especially after what we saw happen this weekend.

DANIELS: Yeah, I was on the convention floor, and at first there wasn't a lot of it, but as soon as the prayer started, there was a huge uproar. They started chanting, "Bernie, Bernie" during the prayer.

GRUMKE: So you were kind of talking to people within the convention about how big of a deal it was, right?

DANIELS: Yeah, how big the #DNCLeaks have been, and people have been saying it delegitimizes Hillary Clinton. This is coming from Bernie Sanders supporters. And it's interesting because when you talk to Hillary Clinton supporters you see the exact opposite. They say it's time to move on, we have things to do, we can worry about fixing the DNC after we beat Donald Trump. Hillary had the votes. The perception that there was a thumb on the scale isn't good, and it isn't playing well with the Bernie Sanders voters.

GRUMKE: And then a couple days ago, they said they were going to put together a committee to consider changing the superdelegate rules, so there was kind of an admission that, "Hey, maybe things aren't really working this way."

DANIELS: Every time there's been concessions, I think the Hillary Clinton camp, the DNC, hopes that will tamper down the protests, but what that does is legitimizes the protests. It's saying, "See, we told you something was wrong."

These two will be in Philadelphia for the rest of the week. You can follow along with them on Twitter: @KGrumke and @EugeneDaniels2.

And we're really curious: Do you care what happened with the DNC, with Debbie Wasserman Schultz stepping down? Does this even matter, or is it all within this political bubble that we're in right now? Let us know.